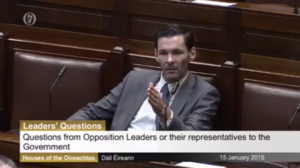 In a statement, Mr O’Brien said:

“I am announcing today that I will not be contesting the next General Election.

“This has been a difficult decision for me to make and it is one that I have made after several months of consideration.

“I have had the great privilege and honour to serve the people of Cork for twenty years as a Sinn Féin elected representative, first as a member of Cork City Council for 11 years and the last 9 years as a TD.

“In that time I have contested seven elections on behalf of Sinn Féin and I want to thank the voters for giving me the opportunity to represent them. I have always served in public office to the best of my ability as a proud member of Sinn Féin, as an Irish Republican and a socialist.

“After two decades, I feel the time is right to pursue new personal challenges and opportunities, and to step down knowing I have played a part over many years in ensuring Sinn Féin is in a very strong position in Cork North Central.

“I believe it is crucial that the people of Cork North Central continue to be represented by a Sinn Féin TD and I will play my part in making sure that we retain this seat by remaining an active member of Sinn Féin, and assisting the party in whatever way I can into the future.

“I would like to take this opportunity to thank my family first and foremost; as well as my fellow party members in Cork and throughout the country for their years of comradeship and support.

“I will see out the remainder of my term in the Dáil and I will continue to serve the people of Cork North Central as a TD as best I can until a general election is held.”

And What Do You Do?