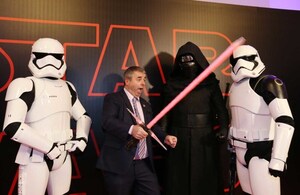 Kevin ‘Boxer’ Moran, the Minister of State with responsibility for the Office of Public Works (OPW) at The Last Jedi premiere (December 2017) in Dublin

The Longford-Westmeath TD said he will be standing in the next election as a stand-alone independent, as opposed to the umbrella of the alliance.

Mr Moran said if he is re-elected he may join a new political grouping in the new Dáil.

Mr Moran was a founding member of the Independent Alliance, spearheaded by Mr Ross and Finian McGrath, but it has been dogged by internal squabbling.

Poor relations within the group led to the departure of Sean Canney, the junior minister, from its ranks in 2018 over the sharing of a ministerial role with Mr Moran.

‘There Should Be A Criminal Investigation’

6 thoughts on “Leaving The Alliance”