Good to catch up again with ⁦@BorisJohnson⁩ in Stormont, we’re talking about the new deal and the new prospects for Northern Ireland pic.twitter.com/Uw1dGcfMdn 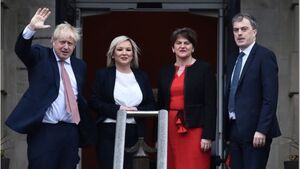 Ahead of his meeting with Taoiseach Leo Varadkar later today

Boris Johnson is preparing to hand over up to £2billion as part of a deal to get Northern Ireland’s power-sharing executive up and running, according to reports.

Sinn Fein and the DUP have finally agreed a deal which ends the three-year impasse but it has involved compromise on both sides and a huge financial settlement for the region.

A reminder as our political representatives meet with both the Boris Johnson & Leo Varadkar today – this ruling still stands & sets a dangerous legal precedent that reduces a fundamental provision of the Good Friday Agreement.

Cone Of No Shame