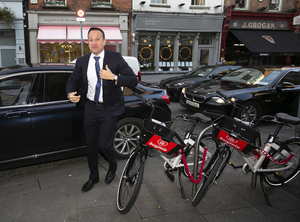 After listening to An Taoiseach on RTÉ Radio One’s This Week programme yesterday it is hard not to conclude that he is planning to head to the Áras on Thursday to seek a dissolution of the 32nd Dáil.

Only he knows for sure, but his joint trip to Stormont today with the British Prime Minister does seem like the opening act of his pre-campaign lap of honour.

He is unlikely to head to the Park on Wednesday as the EU Commission President Ursula von der Leyen is in town for a meeting at Government Buildings followed by a State dinner at Dublin Castle.

That leaves Thursday as the most likely day, though the Taoiseach could opt to delay even a little longer as the Greek President arrives in town for a State visit but, whether it is this week or next week, there are two weeks left, at most, where the timing of the election remains even vaguely within the Taoiseach’s control.

As he acknowledged on Sunday, while losing a vote of confidence in an individual minister does not necessitate an election, it would be politically unsustainable to stay in office after losing one. Especially when he has long said that his preference was for a Summer 2020 election.

So, his options are limited. Call the election in the next week, or so, or wait to have it foisted upon him.

Limited choice or no choice at all – was it for this that Fine Gael TDs dumped Enda Kenny and rejected Simon Coveney? There are echoes of Gordon Brown about how Leo Varadkar has handled this, a comparison I made in a column here shortly after Varadkar became Taoiseach.

Whatever about the Taoiseach’s handling of the election’s timing, his fate will be decided by how he does in the campaign, if voters have not already made their minds up on him.

A few weeks back a good friend of mine put forward the theory that the next election could be like the 2007 campaign.

To refresh your memory on the 2007 campaign, the Fianna Fáil led government went into it with most pundits thinking it would lose. To be fair the newspaper polls were pointing to such an outcome.

An Irish Times TNS/MRBI opinion poll published just weeks before the election was called, showed a swing to Fine Gael and corresponding fall in support for Fianna Fáil.

Fianna Fáil’s support had been dropping since late 2006, due in large measure to coverage of Taoiseach Bertie Ahern’s testimony to the Mahon Tribunal and a series of leaks from the Tribunal.

On the eve of the election the Fine Gael-Labour alternative was up to four points ahead Fianna Fáil and the PDs. Chuck the Green Party in with FG and Lab and a possible FG/Lab/Green alternative was 10pts ahead.

The Fianna Fáil campaign, of which I was a part, had a shaky first week followed by a slightly calmer second week, with the campaign continuing to be dominated by Tribunal leaks. When, in the third week, the campaign focussed back on bread and butter issues, Fianna Fáil turned it around.

It is an interesting analogy but, to paraphrase the late Brian Lenihan Snr, on mature reflection it is not one with which I agree. Let me explain why.

Clearly there are some comparisons. Just as Bertie Ahern faced the electorate in 2007 on the back of two full terms in government, Fine Gael has now been in office for nine years. It owns the achievements and failings of the last nine years, but it also has the problem of over familiarity. Any party in office for almost ten years can start to look jaded stale and out of ideas.

After almost 10 years of even the most benign administration, voters are tempted to have a look at the other lot has to offer and see if there are viable alternatives.

They did that all in 2007 and – despite all the damaging stuff from the Tribunal – found the Fine Gael led alternative seriously wanting.

Despite having had all that time to prepare itself, Fine Gael went into the 2007 election offering a mish mash of half-baked micro-policies including proposals to have boot camps for miscreants, a ban on hoodies, late-night drunk-tanks, legalising “small” brothels and placing bins in youth clubs and churches where illegally held guns could be dumped anonymously.

It is as if wasn’t really prepared for a win. That is not something you can say about Fianna Fáil now.

So, if it is to have any chance to survive Fine Gael will have to do more than simply blame the current health and housing crises on what Fianna Fáil did or did not do over ten years ago.

Doubtless Fine Gael’s polling is telling it that this plays well with core voters, but that is a dwindling cohort. All this kind of response does for undecided voters is to tell them that Fine Gael have been powerless and ineffective for nine years – in office, but not in power.

Telling voters that Fine Gael has only been running housing policy for the past three plus years is not going to cut the mustard with voters either. Just as promising, if re-elected, to increase pensions by €5 per week, while promising tax cuts, stretches credulity.

In promising to both spend more and tax less Fine Gael is at both showing that it has not learned the lessons of the economic crash, while also jettisoning its potential claim to be the party of fiscal prudence. With just one remark the Taoiseach junked his Finance Minister’s careful posturing of recent years.

Never mind the attempt to pull the wool over the eyes of all those pensioners who have been following the pre-budget machinations of every Budget since 2016 and recall the running battles between Fianna Fáil’s Willie O’Dea and successive Fine Gael ministers over past pension increases.

Without doubt the coming election campaign is going to be most nasty, vicious and personalised we have witnessed. This is set to be a battle to the political death between the two main protagonists with Micheál Martin having the advantage of having seen action as leader in past battles.

Varadkar comes into it not just as the neophyte, but one who faces into the worst of all possible worlds.

This is the campaign and the contest for which he has been preparing himself since defeating Simon Coveney. It is the election for which every action, inaction and reaction of his time as Taoiseach has been calibrated and measured.

Yet it is not at the time and political place of his choosing. He knows having the nightly news filled with reports of hospital trolley crises and problems in emergency department across the state is no backdrop against which to have an election, never mind a deferred RIC event.

The macro economy is doing well. There should be a discernible feel good factor, but voters do not give Varadkar or Fine Gael the credit it thinks it deserves, as they are more focused on the daily impacts of the long running crises in health and housing and a range of public services collapsing.

While the outcome is obviously unknown and the campaign will matter, right now, looking at the polls and seeing how the election may play out in each constituency, my view right now is that this is not just Varadkar’s election to lose, but that he is already very close to doing just that.