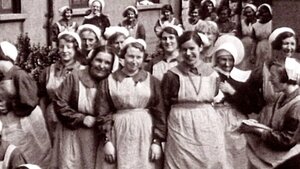 A Magdalene laundry in the 1950s; a tweet from Irish Examiner journalist Conall Ó Fátharta in response to a tweet from Taoiseach Leo Varadkar in December 2018

A coalition of institutional abuse survivors and supporters has called on all election candidates to commit to setting up a National Archive of Historical Institutional and Care-Related Records.

“Survivors, academics and practitioners call on every election candidate and political party to commit to a National Archive of Historical Institutional and Care-Related Records.

A coalition of institutional abuse survivors and those affected by adoption, along with academic and practising archivists, historians, psychologists, sociologists and lawyers, have called on all election candidates and political parties to commit to establishing a National Archive of historical institutional and care-related records.

The group says that this should be a cross-party commitment, which is urgently acted upon in 2020.

The group has called for the creation of an independent national archive, as an Annex to the existing National Archives, which would provide at a minimum:

This call to politicians builds on advocacy work by all members of the coalition over the past months and years.

This work includes: resisting the current Government’s proposed Retention of Records Bill, questioning the secrecy imposed by the ongoing Commission of Investigation into Mother and Baby Homes, and highlighting to national and international human rights bodies the failure of accountability for Ireland’s ‘historical’ institutional and adoption-related abuses (such as: the refusal to give survivors access to evidence held by the State and Church authorities, the absence of criminal prosecutions, and procedural barriers to survivors accessing the civil courts).

Read the group’s call to action in full here

4 thoughts on “Not Forgotten”