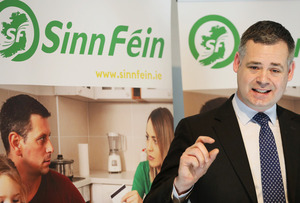 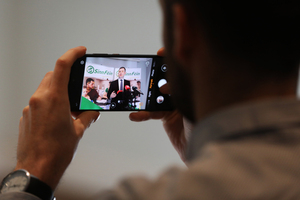 Sinn Féin spokesperson on Finance Pearse Doherty talking to the media as he published Sinn Féin’s proposals to ‘put money back in the pockets of workers and families’ including a €1.2bn pledge to exempt anyone earning under €30,000 from paying Universal Social Charge.

The party is also proposing to reduce the retirement age from 66 to 65 and increase the State pension by €20.

Combined these two measures will cost over €1.1bn. Sinn Féin is also again pledging to abolish the local property tax in this general election at a cost of nearly €500m.

“That shows the quantum of money that we’re talking about putting back into people’s pockets, but there’s other measures as well,” he said.

Mr Doherty also highlighted Sinn Féiin’s plan to abolish levies on non-life insurance policies at a cost of €630m per year. The party claims this will reduce premiums by around 5pc….

‘It’s up to them to do that’ – Sinn Féin won’t ask retiring TDs to give back some of their pension pots (Independent.ie)

34 thoughts on “Your Money In Their Hands”