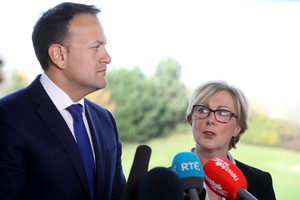 The Irish Independent reported that public service employees, who joined after April 6, 1995 and who can retire at 63, can access a supplemental pension equal to the State pension until their State pension begins to be paid out at 66.

However, this is not available to private sector workers who are legally obliged to retire at 65.

Instead, they must claim Jobseekers’ Benefit until they reach the age of 66.

The Jobseekers’ Benefit payment, the Irish Independent reported, is €45 less than the supplemental pension that public service workers can receive.

Later last night, Hugh O’Connell reported that Taoiseach Leo Varadkar, on the campaign trail, said “Fine Gael plans to introduce a transition payment at the same rate as the State pension to avoid people having to apply for the dole when they retire”.

The Minister for Employment Affairs and Social Protection Regina Doherty then released a statement saying:

“Tonight, I can confirm that this new transition pension will be paid at a rate equivalent to the Contributory State Pension. This change provides financial certainty to people retiring at 66.”

“They’re all scrambling to get around this. Really they’ve been pushed into this corner by the Labour party and Sinn Féin who’ve made commitments. The Labour party not to allow the increase to go next year to 67 and Sinn Féin to go even further and say it will be reduced to 65.

“So both parties, Fianna Fáil and Fine Gael have been all over the place on this, I think.

“And last night we had, first of all we had the Taoiseach suggesting that it’s transitional payment which would match the State pension would be introduced for people who are retiring from 65 onwards.

“Then the statement came out from Social Protection, Minister Regina Doherty, seemed to be suggesting that this transitional payment will only kick in next year when the State pension goes up to 67.

“So we’re a little bit, still unclear on where the parties stand on this.

“And then you also have Fianna Fáil, Micheál Martin, at one point saying that, he seemed to be deferring the increase, pending a review. But now they seem to be going for the transitional payment as well.”

Severance For A Job Well Done