Standing room only here at the @RCPI_news for the #Stop67 campaign which is a @SIPTU led coalition with @NWCI @activeirl and @AgeAction who are calling for a fair pension system for all #GE2020 #AgeingEqual pic.twitter.com/m28yCFa0Fa

Ms Buckley said the campaign has been running for “a number of months” but today’s launch of the campaign is being carried out in conjunction with other groups such as the National Women’s Council of Ireland, Age Action and Active Retirement.

Ethel Buckley: “Our priority is to ensure that the legislation is changed so that they do not proceed with 67 on New Year’s Day [2021] and we have not heard yet, from Fine Gael or Fianna Fáil that they will repeal the legislation.

“So our campaign will continue, in fact it will ramp up to get those commitments from those parties.

“And the first priority of the next administration, however that will be made up, is to repeal the legislation and then to engage in a negotiation, a real negotiation, on the issues presented by State pension age in the long term.

“The progressive parties have said that they will legislate to remove the 67 increase, with Fianna Fáil and Fine Gael have not yet.”

Seán O’Rourke: “Well, effectively, have they not done the same thing by saying they will have a transition payment, equivalent to the pension?”

“No, I have not heard them saying that it is equivalent to what people would receive on the State pension. What I have heard them say is they will continue the transitional arrangement that was there.

O’Rourke: “I’m just looking at what Fianna Fáil have said. They will pay sums equivalent to the old-age pension to people over 65 in the meantime, pending a review.”

Buckley: “In 2017, there was a Joint Oireachtas committee looking at the issue of the State pension. And there were very prominent members of the Fianna Fáil party, including Willie O’Dea, the pensions spokesperson, on that committee.

“And the committee recommended to the minister, in July 2017, to conduct a review and to not go ahead with 67 as planned.

“That was in July 2017, we’re now in January 2020 and they have not done that. So we have heard this before from Fianna Fáil and Fine Gael.

O’Rourke: “And what about the cost of this? I mean what’s your estimate of the cost?”

Buckley: “Well, the minister’s estimate of the cost, she [Regina Doherty] was, there were parliamentary questions put to the minister Regina Doherty on the 10th, 11th and 12th of December and she said, on the record on the Dáil, that the annual net cost is €217billion a year. Those are the minister’s figures.

“And we accept them.”

O’Rourke: “Yes, but I mean the gross figure is €430million and that’s the basis upon which they must operate. And what you’re saying is the net thing, which I suppose, you know, it allows for what the State would claw back in income tax and so forth.” 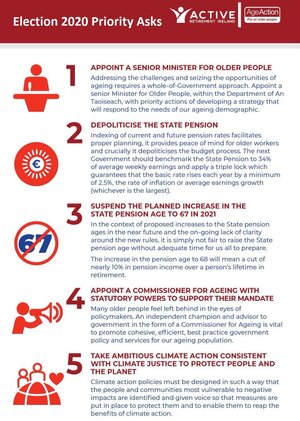 This Saturday, at noon.

Outside the Intreo office on Cork Street in Dublin 8.

People Before Profit’s Bríd Smyth, above right, who’s hoping to retain her Dáil seat in Dublin South Central, will host a protest over the pension age increase.

“Next year the age at which a person qualifies for a state pension will increase to 67. Each year’s increase in the pension age costs a worker €12,911 a year.

“So, next year, the Irish state will save €25,822 for every worker in the country. This is a shocking robbery and must be stopped. This is will be one of the highest retirement ages in the developed world.

“People Before Profit TDs want to restore the pension age to 65. We shall try to initiate a major ‘people power’ movement that will seeks to follow the example of French workers and restore an established retirement age.”

Roll On, Roll Off

‘One Child Made Homeless Every 3 And A Half Hours’

22 thoughts on ““A Shocking Robbery” [Updated]”