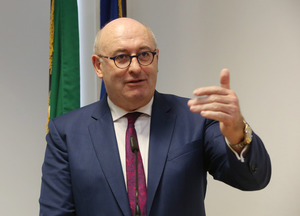 Ireland’s European Commissioner Phil Hogan, who will be the EU’s lead negotiator in the free trade negotiations with the UK

1/ @PhilHoganEU said the riskiest part of the Brexit process had yet to come and that a “crash-out” Brexit was still a possibility at the end of December.

“I’m very concerned at what I see in Ireland the moment. There’s a lot of complacency in the system. Commentators and the media and the public generally don’t seem to realise we’re starting the most difficult part of the negotiations.

It was easy enough to get some compromises in phase one, relative to the interests of every member state, and the interests now of the UK with an 80 seat majority.

If things had gone wrong in the first part of the negotiations, you can consider in the context of a general election what this would have meant for manifestos in terms of income, in terms of wages, in terms of jobs, the possible economic rupture in terms of a crash out Brexit.

This this is still on the agenda,

The real cut off point is the 31 December 2020, not 31 January. So, people should come out of their slumber is some way and wake up to the reality that we’re in the intensive phase of the negotiations and in the more risky part.”

Earlier: Britain on The Brink

2 thoughts on “A Bitter Phil”