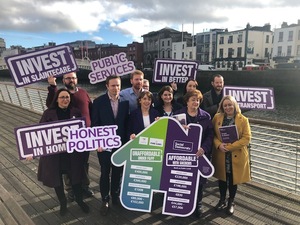 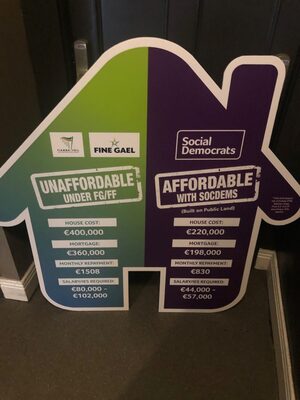 The launch of the Social Democrats General Election 2020 manifesto with co-leaders Roisin Shortall and Catherine Murphy (top centre) surrounded by some of the 20 candidates running for the party..

The document, entitled ‘Invest in Better’, is described by the party as a roadmap for what it calls a “uniquely Irish version of the Nordic model“.

“We are what it says on the tin,” said co-leader Róisín Shortall.

“We are for investment in public services. This is not reinventing the wheel. We’re following the approach of Nordic countries that work well for everyone.”

The party said it will reshape the National Development Plan to give priority to public transport and cycling, while also putting any windfall tax gains towards the DART Underground project.

….The party is also proposing an extension of parental leave which would ensure parents can access paid leave for the first full year of a child’s life.

The first six months would continue to be composed of maternity leave, with a further six months which can be shared by the parents.

3 thoughts on “Compare The Market”