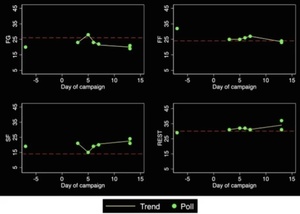 Tabulations of the state of the main parties following six national opinion polls. Tables include estimates of how these votes would translate into seats.

After six national polls since the General Election was called.

How do things stand?

Via RTE, Michael Marsh, a Professor of Comparative Political Behaviour and a Fellow of Trinity College,  writes:

The table above shows where these trends leave the parties at present, with Fianna Fáil marginally ahead of Sinn Féin, 23.5% to 22.5%, and Fine Gael in third place with 20%. Green lead the rest with 8.5%.

It is striking that the combined Fianna Fáil and Fine Gael vote is less than 44%, the lowest we have seen at any point since polling began, and a long way below the figure of 65% seen in 2017.

Sinn Féin’s rise is also remarkable, well up on its polling before Christmas and more than twice its local election vote last year, normally a good guide to the next election.

One unusual feature here is that Sinn Féin is fielding fewer candidates (42) than the number of seats it might be expected to win on its poll of polls vote. (It is not just commentators who are surprised at these poll numbers!)

The prediction of 42 seats here is almost certainly too high, but if the party did win 22% of the vote, the likelihood is that it would have enough votes to win two seats in several places where it is fielding only one candidate.

The most important feature is that the largest party, Fianna Fáil, is expected to win well short of even the 50 seats won by Fine Gael in 2016. This would present severe problems for Micheál Martin when trying to form a government.

And with Fine Gael only on just 34, even a historic break with the past in the form of a Fianna Fáil/Fine Gael coalition might not solve the problem.

Their combined seat total would be short of the 80 seats needed for a majority, although the most positive estimates for both would sum to 79….

How Was it For You?

4 thoughts on “It Polls For Thee”