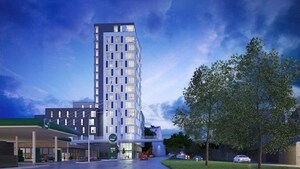 From top; an artist’s impression of The Railway Gardens development on Cork’s South Link which was approved under the fast tracked Strategic Housing Development (SHD) scheme; Dan Boyle

A feature of being an elected councillor again, is the capacity to attend workshops and seminars on policy areas pertinent to local government.

I attended one such seminar, organised by the Irish Planning Institute, on the subject of increasing urban densities, something of which I would be very much in favour.

Making presentations at the seminar were officials of the Department of Housing and Bord Pleanala. They were there to laud the success of Strategic Housing Development zones, in helping to bring about fast track planning.

SHD zones work where developments of 100 or more housing units get to bypass local planning, being sent to directly to Bord Pleanala for adjudication.

Part of the presentation given was extolling a proposed development recently given permission, but yet to begin construction, in my electoral area.

It is for a 17 storey built to rent facility comprising of 118 apartments. Such has been the developer led enthusiasm for SHD zones that critical evaluation of this application was altered from a 15 storey to a 17 storey building mid process, encouraged by Bord Pleanala itself.

This was against the views of Cork City planners, elected public representatives and the surrounding local community. The SHD process contains a veneer of consultation but the experience is that submissions are for the most part ignored as being inconvenient to the process.

Lack of democratic engagement is the prime victim of the SHD process. None of its supposed benefits are being achieved either.

Quicker planning is not leading to quicker development. One of the major contributing factors to the housing crisis in Ireland has been the hoarding of land in order to increase its value.

Having planning permission, sometimes available for a ten year period, has increased the practice of land hoarding.

The other failure of SHD zones is that they are utterly incapable of bringing about better affordability in housing. This is especially true of high rise private property developments.

This results in a further reduction in the acquiring of social housing units. Legislation allows local authorities to purchase, at market value, 10% of any private housing development for the purpose of social housing.

At one stage 20% was what was allowed for in legislation. For some strange reason this has been diluted in recent tears.

The reduced percentage is somewhat moot as the combination of land hoarding, increased construction costs and no little amount of price gouging, have made purchasing such units beyond the reach of most local authorities.

The most recent response of Cork City Council has been to acquire what are known as Part Five properties, not through purchase, but by way of 25 year leases. This provides a short term benefit to house some people more quickly, but offers no long term solution towards increasing the local authority housing stock.

If we are to have a new broom new government, one of its first priorities should be to immediately reform the SHD zone process.

It would be the best way of getting our house(s) in order.