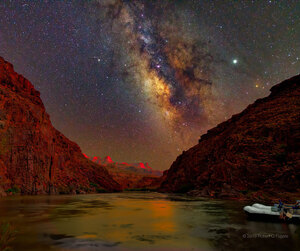 A dramatic composite of two shots taken from the same location inside the Grand Canyon, one hour apart. To wit:

The two images were taken last August from the 220 Mile Canyon campsite on the Colorado River, Arizona, USA. The peaks glow red because they were lit by an unusually red sunset. Later, high above, the band of the Milky Way Galaxy angled dramatically down, filled with stars, nebula, and dark clouds of dust. To the Milky Way’s left is the planet Saturn, while to the right is the brighter Jupiter. Although Jupiter and Saturn are now hard to see, Venus will be visible and quite bright to the west in clear skies, just after sunset, for the next two months.