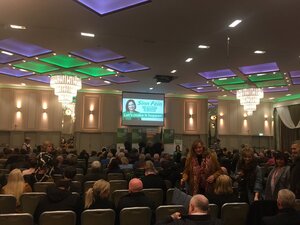 People continuing to arrive half an hour after the Sinn Féin meeting in #Cork kicked off. Not far off a thousand people here now. Extra chairs were wheeled in, adding to the 372 originally put out and many people are standing at the sides and at the back of the hall. @rtenews pic.twitter.com/kQbwKTcd4y

Pearse Doherty tells the public meeting in Cork that 3,000 new members have joined Sinn Fein in the last week, while he says another 4,000 people are in the process of joining the party @NewstalkFM pic.twitter.com/sOLClGlVrM

At Rochestown Park Hotel in Cork.

His People Are From Cork

25 thoughts on “Meanwhile, In Cork”