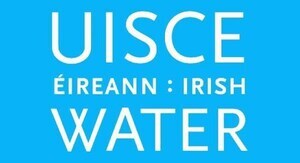 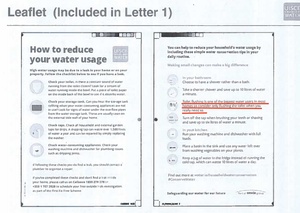 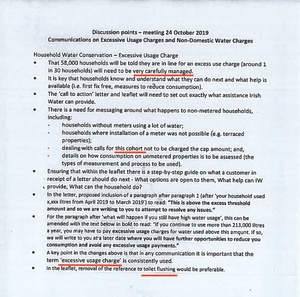 Journalist and academic Ken Foxe has obtained through Freedom of Information Irish Water’s plans to begin charging 58,000 households for excessive water use.

Meeting with Dept of Housing told process would need to be “carefully managed”. Concern raised over advising people to cut down on “toilet flushing”

Dept of Housing said Irish Water needed to be careful to be “faithful” to exactly what the law allows for. “If [excessive use letters] appear to suggest Irish Water is operating differently to what is in legislation, they will be open to challenge.”

Proposed timeline would be an initial “call to action” letter for those using excessive water. This would be followed up with a “notice” letter, a “reminder”, and finally the bill.

Charges would be capped at €500 per year for those with water in and water out services. It would only apply to those who had used more than 213,000 litres of water in the previous 12 months.

Overall, 58,061 customers were deemed to be excessively using water.

Of those, around 6,000 would be the first to be contacted. This would be followed by a “pause” to determine operational impact and the level of leak repairs that might be needed…

The project is, according to Irish Water, “reaching a state of readiness” for letters to be sent.

They had been preparing to start issuing the first batch of letters last October. The process was delayed because of (among other reasons) issues over data protection and how customer information would be handled:

The data being managed includes obvious things like name & address, but also number of occupants in a house, and any special medical conditions requiring extra water. In addition, it could provide info on people’s habits and when they’re likely to be home based on usage.

Empty Rooms Can Be So Loud