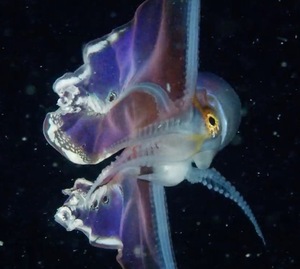 The spectacular defence display of the Blanket Octopus, captured during a night dive in the Lembeh Strait in Indonesia. Already iridescent, the female octopus has a huge translucent membrane connecting her dorsal and dorsolateral arms which can be unfurled up to two metres long to threaten potential predators.

The male Blanket Octopus, in stark contrast, has no such warning flag.

Generally, no more than an inch long, he dies immediately after mating.

Which is probably for the best.

Things You Didn’t Know About Sloths

Things You Didn’t Know About The Dung Beetle