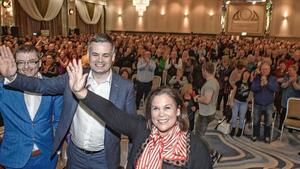 A number of people I know attended the first of the Sinn Féin’s ‘I can’t believe it’s not an election’ rallies.

Some went out of curiosity. Others were converts to the idea that Sinn Féin, of itself represents the change that is needed in Irish society.

For the most part the overwhelming number, among a very impressiave audience, there were those already part of Sinn Féin family. A cursory look at registration plates in the hotel car park showed many had travelled considerable distances to be there.

It was a rallying of the troops (if you excuse the military analogy) meant to celebrate what had been achieved and tantalise about what could be.

Nuremberg it wasn’t. Nor was it anything new or novel in Irish politics.

On losing power in 1948 De Valera engaged in a nationwide (and international) tour to solidify and strengthen his party’s support. The chimera was that the meetings were tagged as being anti partition events.

The coming into being of Fine Gael in 1932 was pressaged by a series of open air rallies held under the auspices of the Army Comrades Association/National Guard (The Blueshirts) led by the infamous Eoin O’Duffy (first leader of Fine Gael, since written out of the party’s history).

New parties established between elections, like the Progressive Democrats and more recently Aontú, have engaged in nationwide tours, attracting significant attendances, when trying to establish themselves.

Large gatherings didn’t always ensue, but seeds were sown in ways that showed that another Ireland was possible.

Before I began thinking of becoming politically involved, I was impressed when two friends of mine joined the Democratic Socialist Party, developed by the much missed Jim Kemmy TD, after a low key not very well attended meeting in Cork.

A more justified criticism of the current Sinn Féin exercise is its implied theme of victors as victims.

The only clear result from the 2020 election is that there has been no winner. There are parties that have been more successful than others, but no party has been given the ability, of itself and by itself, to determine what happens next.

What has happened in this election is a rejection of traditional ways of practicing and expressing our politics. The difficulty that has arisen, and it should just as well be seen as an opportunity, is that the direction of change while significant has not been sufficient not to have government that also doesn’t include one or other (and maybe both) of our civil war parties.

The contrived angst of castigating other political parties for having the audacity of engaging with the public, is an example of the many ways we have practiced politics in the past having failed.

The same is true is about the somewhat empty concerns of shadowy figures indirectly influencing the process of government. As far as I am concerned this is a critique that could be applied as much to the Construction Industry Federation as it would to any self styled Army Council.

We are a representative democracy with many participatory elements. Our undervalued Constitution obliges us to politically behave like this.

The problem has been that our representative system has behaved for too long on the basis that elections are the consultation. Further consulations, by this logic, would be further elections.

Ultimately it has to be about a change of culture.

17 thoughts on “Dan Boyle: How Green Are My Rallies”