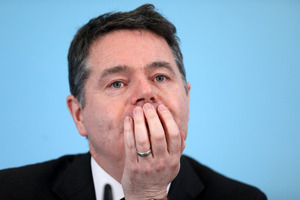 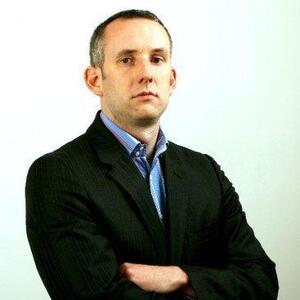 Some time ago, a group of eight junior ministers went complaining to Minister Paschal Donohoe that the expenses they are paid are not enough and asked him to do something about it.

Naturally, I submitted an FOI request for records related to this meeting and its outcome:

At first, the Dept of Public Expenditure (the department responsible for FOI in Ireland!) did not even answer the request.

I sought an internal review on the basis this was a “deemed refusal”. The Department eventually responded to say they held no records relating to the meeting.

I appealed the decision to the Information Commissioner. It was hard to believe that a meeting could take place between a Minister & eight Ministers of State & not a scrap of paper exist relating to it.

In particular, I asked if records might be held on phones or in private emails

The Department said they had searched all their internal emails. They’d asked officials if they held records.

They claimed it was an “informal meeting” that happened “on the margins of another meeting”. Therefore, there wasn’t a single record about it

They said it was on the record that Minister Donohoe does not use “private email accounts”. And the department said searches of such accounts could not be required under the FOI Act….

And more bizarre again, the Information Commissioner agreed that there was no reason to ask the minister if he had held any records

They said that in a previous similar case (Terry Prone/Frances Fitzgerald) I had been able to provide documentary evidence that such records existed on phones & in private email accounts. I didn’t have evidence this time. How on earth would I?

The Information Commissioner agreed with the department decision to refuse the request on the basis that no records existed…. 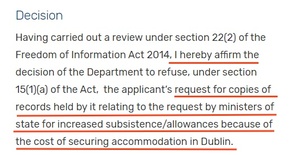 …And there you have it, Minister Donohoe can be lobbied by eight of his colleagues to increase their expense payments and not a single record of this meeting exist.

The meeting is a shadow. Worse, this involves the department who are responsible for oversight of our FOI laws …

… worse again, the Information Commissioner believes it is up to the requester to provide evidence that such records exist. This is clearly impossible given requesters have no access to the relevant records and that is why they are making an FOI request in the first place …

… and worse again, the Information Commissioner believes it would be unreasonable to even ask the minister the question of whether he held/holds records relating to this meeting on his mobile phone or in his private email address.

And presumably we are expected to believethat this lobbying happened as if by magic. Nine government ministers sitting down having a discussion about their expenses on the “margins” of another meeting.

And the minister responsible did not take even a single note of it.

6 thoughts on “The Meeting Took Place But Never Happened”