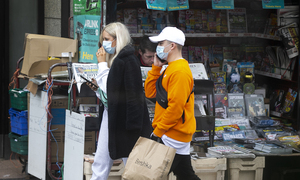 “why is it the guys who really know how to run the country are cutting hair and driving cabs”?

Whether you call them hurlers on the ditch, Monday quarter-backs or that prick at the end of the bar-counter, there have always been (and will always be) those bolshie, mouthy gits who, in the words of the great Brendan Behan, go about like eunuchs in a harem seeing others doing but knowing they can’t do it themselves.

Most are irritating but essentially harmless nuisances, even the ones who manage to discover how to use social media.

But there are others. Those who go that bit further. Those whose malicious intent is less easy to spot in an online era of nonchalant cynicism and aloof detachment.

The Covid-19 crisis is a god send for them. The constant hunger for information, any information, gives them a golden opportunity to peddle their anonymous, conspiratorial garbage. No claim is too ridiculous or nonsensical for them not to push out there.

We saw several local examples of it online over the weekend.

One was the widespread dissemination of a WhatsApp voicenote purporting to feature a Dublin accented member of the Defence Forces telling fellow soldiers to “be in the barracks” early on Monday morning for an “Status Red” emergency lockdown that would be announced by the Taoiseach at 8am.

I was amazed to be sent the recording by a colleague who sincerely thought it was genuine. Though I immediately knew it was fake, I still had to take a minute to double check before telling my colleague that it was utter bullshit.

Another, even more malicious and nasty hoax was highlighted on Sunday evening by the Infectious Diseases Society of Ireland (IDS). They reported on Twitter that there was a fake message being circulated on WhatsApp which purported to come from IDS consultants in Cork.

While most of the responses praised the IDS account for calling out the hoax and rightly bemoaned the recklessness of those behind it, there were some who wanted to know what the misinformation was and wondered if the hoaxer may have a valid point.

The virtual world is full of willing idiots.

The final example came as I sat down to start writing this column. I was barely two paragraphs into typing this piece when a very good friend in Northern Ireland texted me to ask if I was aware of the fake rumours flying around WhatsApp, Twitter and elsewhere, claiming that the Irish Defence Forces were ready to seal off the border.

I checked online, and there they were, just as he had said. But there was more too. There were claims that a total military enforced lockdown was set to be imposed from 11am. There were also claims, accompanied by photos, of hire-cars and vans being rented by the Gardaí and Defence Forces.

Is the incorrect and warped information being spread the work of malign individuals alone, or should we be looking beyond the cranks and pranksters and checking for the handiwork of more nefarious actors, be they domestic or non-domestic?

Cui Bono? Who gains from this misinformation? Indeed, is it simply misinformation or are we looking at something more serious, more sinister?

Do some of the examples I cite above not better fit the definition of disinformation, or to use the old soviet era term: dezinformatsiya namely, the deliberate dissemination of false reports designed to mislead public opinion and engender public cynicism, uncertainty and distrust?

Suggesting the Irish Defence Forces readying themselves to head to the border runs the risk of enflaming very deep-seated fears and passions within the two communities, unionist and republican, at a time when the border has been a hot button issue, thanks to Brexit.

The notion that Ireland would not be targeted by organised and structured disinformation and trolling campaigns, like those that have hit other EU countries, is frankly naive. Indeed there are increased signs that these campaigns are being expanded.

As I have previously pointed out on Broadsheet. Ireland is already a major target for cyber attackers, why do we think we would be exempt from political attacks, from a range of sources, especially at a time when we are so vulnerable?

The national and international responses needed to deal with the Coronavirus pandemic may see us rediscovering both the necessity and he value of having governments and institutions we can trust to deliver for us.

This is precisely what the disrupters do not want. They need the era of FakeNews to continue. It is in Ireland’s interest to see it end.

When the pandemic passes the State will have to start taking cyber and disinformation threats seriously. That means investing significantly in the building the national defence capacity to block them.

National governments and international institutions must now prove via their handling of Covid19 that they can protect their populations and start to re-establish the trust lost in the global crash. There is nothing certain about this. Our government and governments around Europe face a huge test.

This does not mean a return to the pre-crash order, however. The state capacity that was dismissed as excess by many western governments in the early 2000s is now seen as vital. But that capacity is going to be very difficult to re-instate as we look like facing into a potentially deep post pandemic recession.

The plans and promises made in the GE2020 campaign now seem a long way away and the talks on government formation will need to be based on the economic realities facing us when the pandemic passes, whenever than is.

Right now, it is hard to see how we will have a realistic appraisal of what they may look like before September, though this is not a licence to allow talks to go on that long.

I still believe an all-party national unity government is the best way to go in the immediate term, notwithstanding the ease with which it was dismissed by both Sinn Féin and the Fianna Fáil leadership.

I understand that putting several new ministers in place right now may be complex, especially as many will only hold office for six months, but it is possible to do that and still maintain the continuity of pandemic response.

There is a less complex alternative that consists, in essence, of simply formalising what happened at the beginning of last week when the three main opposition party leaders were brought into government buildings.

The leaders of Fianna Fáil, Sinn Féin the Green party, independents and smaller parties are invited to nominate members, under the d’Hondt system, to join the Cabinet Coronavirus subcommittee and participate directly in the government oversight of the crisis.

A special office, with civil servants, could be established within the Department of the Taoiseach to support them in this work. Though it would be a big ask, TDs from across the parties could also try to agree, as happened in the first Dáil, a Dáil political program to broadly guide the government from now till October.

In the meantime, political leaders here should reflect on what the W.H.O. Executive Director Dr Michael J Ryan had to say yesterday:

‘If you need to be right before you move, you will never win! Perfection is the enemy of the good when it comes to emergency management! Speed trumps perfection! The greatest error is not to move; to be paralysed by the fear of failure!’

While he remarks were about the Covid19 pandemic, they could just as easily be applied to so many other situations.