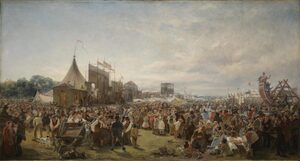 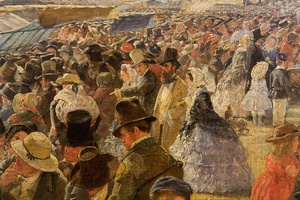 The National Gallery of Ireland writes:

Artists often include themselves in their own works, and there’s another fine example of it in this painting of Donnybrook Fair (1859) by Erskine Nicol, which is on loan to the National Gallery of Ireland from the Tate.

Nicol is clearly identifiable in the throngs at the centre of his magnum opus, walking with his wife Janet & another finely-dressed couple. He included himself as a way of declaring his status as gentleman observer & to demonstrate his familiarity with this subject in particular.

Your Monet Is No Good Here