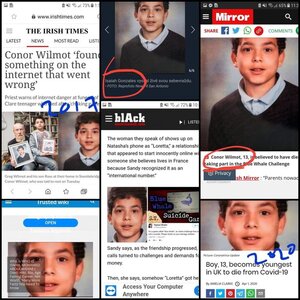 An image of Clare teenager Conor Wilmot, who died by suicide in May 2017, was used online falsely claiming he was the first boy to die from Covid-19 in the UK

Via The Clare Echo:

Now members of the Wilmot family have been disgusted following the publication of misinformation online.

Pictures of Conor have appeared on online articles claiming that he is Ismail Mohamed Abdulwahab who was the first thirteen year old boy in the United Kingdom who is known to have died COVID-19.

Melanie Wilmot outlined her frustration at pictures of her younger brother being used in such fashion. “We’re devastated that they can do this, frankly had enough just let us be and leave Conor alone”.

She appealed to people to report such content if they came across it. “I have well and truly had enough of the news and their crap,” she added.

Previously: Conor Wilmot ‘found something on the internet that went wrong’ (Irish Times,  May 16. 2017)