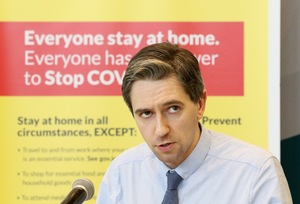 Minister for health, Simon Harris on RTÉ this morning. Be grand #covid19 pic.twitter.com/FyL4w3GcpK

“Remember this is coronavirus Covid-19, that means there’s been eighteen other coronaviruses and I don’t think they’ve successfully found a vaccine for any.”

Thanks Piece of Pi55

Here’s the names of the other 18 Covid viruses: pic.twitter.com/F03XRaCNng

In fairness to @SimonHarrisTD he’s not hiding away from what he describes as “an awful boo-boo” – this is from a Twitter video he did this evening pic.twitter.com/X3FkZv8cr3