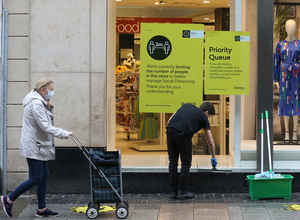 From top; the low-paid can be among the ‘agents of recovery’ in post-lockdown Ireland, writes Michael Taft

The low-paid, the precarious worker, the gig worker and temporary agency worker, the under-employed, the undocumented and the marginalised in the labour market: these are the women and men we now recognise as vital agents in networks delivering essential goods and services in these crisis times.

Where we once, as a society, assumed such poor quality employment was the inevitable result of new business models or low value-added sectors or the competitive nature of markets, we are starting now to see such work and these workers differently.

And as we begin the long unlocking of the lockdown we have an opportunity to assign these men and women a new role; namely, agents of recovery.

The Government projects consumer spending will bounce back next year – by 8.7 percent; however this will still leave it at 93 percent of 2019 levels. We certainly won’t see a full recovery until at least 2022 and possibly 2023.

Even when the current emergency has passed (bearing in mind that there is no permanent exit without a vaccine), consumer spending may struggle. Large numbers of people will be out of work (and, so, unable to spend much).

Even those in work may be reticent to spend – especially in discretionary sectors such as hospitality due to fears of a second wave or of lack of social distancing. Fear and behavioural change may undermine a consumer recovery for years.

Driving a consumer recovery will involve many elements; in particular, privileging the ‘spenders’ – those who have a high propensity to consume. This means privileging lower-income groups and average income households with children.

If you give €100 to someone with a low income they are likely to spend all of it; a high-income earner is likely to save some if not most of it. In uncertain times, it makes sense for a household to save but that doesn’t help the overall economy.

This goes further than just redistribution. It is about giving those on low pay and precarious contracts the tools to effect this progressive distribution. Let’s look at some of these tools.

Collective bargaining has been shown to lift wage floors for the low-paid. The ability of employees to come together to negotiate with their employer strengthens their bargaining power which, in turn, contributes to higher wages and better working conditions than would have prevailed under individualised or market-based bargaining.

Collective bargaining could be extended throughout the economy in two ways:

1) Provide every employee with the legal right to bargain collectively; where a substantial number of employees in any enterprise opt for this method of bargaining, the employer must acknowledge this and engage

2) Establish sector-wide bargaining where representatives of employees and employers negotiate wages and working conditions across a sector (e.g. retail, hotels, agriculture, food manufacturing, etc.). This would protect both workers and ‘good’ employers from businesses that use low-road business models (reduced wages, working conditions) to gain a competitive edge.

Such a model, which prevails in many European countries, provides flexibility (sectoral agreements can be adjusted at enterprise level to take account of enterprise conditions) and promotes productivity through high-road strategies (shifting emphasis on to product and service quality, innovation, customer satisfaction, and investment). Most of all, it lifts the wage floor for the lowest paid, providing additional income for ‘the spenders’.

If people experience uncertain income they cannot plan their expenditure and, so, cannot fully participate in the consumer economy. Collective bargaining can address many of these issues at sector and enterprise level, but there will still need to be policy interventions.

Given the range of contracts, there is no magic bullet to solve precariousness but here’s one small example. Bogus self-employment, whereby employees are treated by their employer as self-employed (to avoid higher social insurance payments, holiday pay, etc.), has long been a feature of the construction sector but is now spreading to other sectors.

This deprives employees of benefits while the state loses out on social insurance payments. In effect, this is an attempt to drive down wages and income.

A very simple rule could be introduced: all employment contracts are considered a standard employer-employee contract unless the employer, with the agreement of the employee, can show that it is truly a matter of self-employment.

If they can’t do that, with reference to Revenue Commissioner and Department of Employment Affairs and Social Protection guidelines, then the contract is assumed to be standard. This would set a new floor for workers in sectors affected by bogus self-employment.

Employees should be provided with the flexibility of moving between part-time and full-time work in an enterprise where the hours become available. This was the intention of the European Directive on Part-time Employment but it was never fully transposed into Irish law.

There are an estimated 17,000 undocumented workers (pre-emergency). These workers are subject to considerable exploitation which has the effect of driving down wages and working conditions for all employees at firm or sectoral level. Alan Desmond, law lecturer at the University of Leicester, suggests we:

‘ . . establish a mechanism allowing for automatic transition to legal status for irregular migrants who have spent a specified minimum period of time, say five years, in the state.

While such a mechanism may justifiably be accompanied by requirements like the absence of a criminal record, such limitations should be few in number to ensure that as broad a swathe as possible of the irregular migrant population can avail of the regularisation measure.’

Automatic and accessible regularisation would remove another low-road element in our business model and help workers to become more fully integrated into the consumer economy.

These and other reforms – the Living Wage, pay-related social insurance payments, a guaranteed minimum income – would raise the income and living standard floor, privileging low-paid and precarious workers and, so, boosting a critical aspect of recovery: consumer spending.

What’s even more important is that these structural reforms would actually give workers themselves the tools to drive the recovery by improving their living standards.

Orthodox theory suggests that restoring growth – restoring profits, employment, investment and fiscal confidence – will address these issues, but that is patently not the case.

Prior to the emergency Ireland had one of the highest levels of low pay in the industrialised world, while the Nevin Economic Research Institute found that up to 500,000 employees were at elevated risk of contractual precariousness with another large cohort at risk of precarious living standards (in-work deprivation, inability to meet an unexpected expense).

Orthodox theory is wedded to trickle-down economics. What we need is a new surge-up economics – raising wages, working condition and living standard floors. And what’s the best way of achieving that?

Give workers the tools and the choice to address their issues – through collective bargaining, precariousness reduction, flexibility, and regularisation.

Do this, and they will become for all of us the agents of recovery.

Failing To Serve The Low Paid