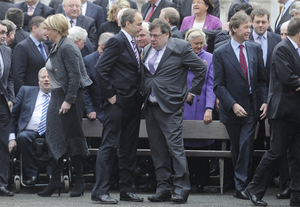 One of the few enjoyable aspects of the lockdown has been the return to popularity of the old-fashioned quiz. Every day brings another invitation to participate in a quiz, invariably a political one, on Facebook, Zoom, Twitter or WhatsApp.

This stepped up a gear last week when I was asked to write a round of Irish politics questions, for a workplace quiz being organised by a friend via the Kahoot app (no, I hadn’t heard it before now either).

So, this week’s column opens with a question the quizmaster deemed too “pointed” for her quiz.

Which senior Fianna Fáil figure said this after a RedC opinion poll put the party on 14% and Fine Gael on 35%:

I originally drafted this as a multiple choice with five options, the fifth being (5). None of the above. No one said anything (in public). I decided against this as I thought the answer to was so obvious. But, as my friend reminded me, the answers are only obvious when you know them.

As I said, the question was not used and was substituted with a picture round shamelessly purloined from a Twitter quiz Senator Malcolm Byrne ran on Twitter a month or so back.

How you coming along with the answer?

I think the answer is obvious, but the problem with knowing the answer is having to face the unpalatable conclusions stemming from it.

Knowing the answer is akin to being in the crowd watching the parade in Hans Christian Andersen’s fairytale The King’s New Clothes pass by. You know others also know the answer; but you hope that not saying it aloud allows the parade to last a little bit longer.

If you have not come up with the answer, here is a giveaway clue: the Red C poll in the question is not the recent Business Post one. While it also has Fianna Fáil struggling on 14% and Fine Gael frolicking on 35%, it was not the first RedC poll to have the two old parties on these numbers.

The RedC poll referenced was conducted for Paddy Power and published on January 7 2011. It put Brian Cowen’s Fianna Fáil on just 14%. It was not the first bad poll result the party had received.

The November and December RedC/Business Post polls had the party on 17%, behind Fine Gael on 34% and Labour on 23% (give or take 1pt).

It’s a familiar situation, isn’t it? Fianna Fáil on the slide. Its support falling steeply and continuously, with no immediate prospect of recovery.

The similarity with what is happening today is even reflected in party spokespeople sticking carefully to the trite old line that they will not be swayed or influenced by polls.

But, in 2011, one minister concluded that it was time to say, stop. Which brings me to the answer to my original question. The senior Fianna Fáil who uttered those words 9 years against was then Minister for Foreign Affairs, Micheál Martin TD.

Faced with steadily declining poll numbers, declining party morale and increasing unease from across the membership Martin concluded that Fianna Fáil needed a change of direction.

On June 16, 2011 Martin convened a press conference at the old Burlington Hotel to deliver a strongly worded statement confirming that he would be voting no-confidence in Brian Cowen.

Martin also told the media that he had offered the Taoiseach his resignation, but that it had not been accepted and he was therefore staying on as Minister. this was despite his lack of confidence in his leader.

Hours earlier Cowen had moved to force Martin’s hand announcing a motion of confidence in himself. The move came after weeks of anonymous media speculation about ministerial dissatisfaction with the party’s declining fortunes and Cowen’s leadership.

In the following days Martin toured the Radio and TV studios expanding on his statement saying that he had “reluctantly concluded” that the party should change its leader and said that “the very survival of the party was at stake”.

All this was in the wake of a global economic crash and almost 14 years of Fianna Fáil led governments.

While the numbers are the same today, the context is vastly different – so different that it makes the same numbers look worse. Even bleak.

Fianna Fáil is facing a greater existential crisis today than in 2011. Just as Martin concluded in 2011, this is not the moment for steady as she goes.

Today, Fianna Fáil has been in opposition for nine years, all of it with Micheál Martin at the helm. He has achieved much over that time.

As I have said here several times, he halted the parties decline at a time when it was unclear that the party was not at risk of falling further. He resisted the siren calls to turn Fianna Fáil into a socially conservative, even euro-sceptic party.

He led the party to a moderate recovery in the 2014 Local Elections (though it had an awful European Election result on the same day) and repeated those modest gains in the 2016 election. That was the high watermark. But, in 2020 and leading from the front, Martin led Fianna Fáil straight back to 2011.

In a moment of possibly unintended candour during his recent Sunday Independent interview with Irish Independent group’s political editor, Philip Ryan, Micheál Martin may have let slip the political philosophy that has long underpinned his leadership and now serves to undermine it.

Answering a question on why the election went so wrong, Martin replies:

In 2016, we came in under the radar. We were very much front and centre in 2020. So I think we became a target very early on and I think we took a view on the budget that we felt attacks would come if Fianna Fail was seen to be profiting from the budget so we took a relatively conservative fiscal position and got sandwiched in between the two…

Roughly decoded, Martin’s MO for the whole of his leadership has been the management of expectations. Indeed, it has been less about its management and more about its suppression. (See the Kenneth Baker story I related here, last November).

Aside from his highly conditional acknowledgement that Fianna Fáil’s manifesto was conservative – an understatement considering how little it had to offer the growing non-propertied group in society – the rest is a succinct statement of Martin’s approach: avoid giving your party a definition or identity of its own.

Martin has permitted his party to be defined by others and opted instead to simply lowering expectations to the point that his people can break out the bunting, organically sourced tinned salmon, and promotions when disaster is avoided, or not, as is the case right now.

The strategy is politely sold as promise low and deliver high, but that is a mantra for governing, not campaigning. When it comes to elections, the Mario Cuomo doctrine applies – campaign in poetry, govern in prose.

Martin has given this his best shot. It is now time for others in the party to offer a future that extends to something more challenging and rallying than just co-signing Leo Varadkar’s missives.

PS. As I was finishing this piece news emerged via RTÉ’s Micheál Lehane of another joint Varadkar/Martin letter, this one to Labour’s Alan Kelly. I decided not to address this development beyond mentioning it here. Besides, having just watched Catch-22 (the 1970 movie with Alan Arkin and Orson Welles, not the recent TV remake), there is only so much surrealism a person can cope with in one evening.