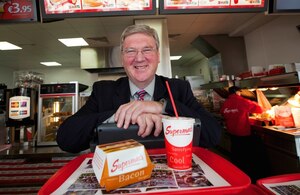 One of the angles frequently used by Irish employers when confronted about underpaying people, is that they have heard no complaints.

Complaining is hard for Irish people, as it must be after holding your tongue for 700 years. You might say that the Republic itself is founded on a letter of complaint in the form of a Proclamation that, simply put, says, we’ve had enough of being second-class citizens.

We all know how that went down.

Irish history is littered with the bodies of people who complained. Naturally many people have learned the wisdom of silence. Irish people tend to be really, really good at not complaining. Even going so far as to stand with authority against those who do occasionally complain. As if to say: ‘Shush, you’ll get us all in trouble.’

Not complaining is repeatedly relied upon by various authorities to justify the liberties it often so casually takes.

Pat McDonagh of Supermacs when he was asked on RTÉ radio recently why he charged staff for food, whether they wanted it or not, replied that the staff seem “quite happy” with the arrangement. And possibly “quite fired” if they did complain.

Minister for Employment Affairs and Social Protection Regina Doherty when asked about complaints concerning JobPath said something similar, basing the perception of “happiness” on a carefully worded satisfaction survey, the work of a private contractor, paid gazillions by the taxpayer, which helpfully delivered stats for minimal complaint and maximum satisfaction.

However, there still remained a small percentage of unusually stubborn people who complained anyway. Of these it was generally implied that such people are “trouble”, or just plain contrary, if not mentally retarded.

Still, it’s not normal to never complain. To get around this we appear to have evolved ways of complaining without actually complaining by deflecting our attention elsewhere to complain about something else.

This habit of deflection is like a national tic. In an earlier article of mine on Aosdána, I wrote about Aosdána being largely absent from the local political scene, though some of its members were very visible in international justice campaigns that invited zero personal blowback. The old “the situation in outer Mongolia is getting bleaker,” stratagem.

It was the wrong thing to do, writing about Aosdána, since some of the members felt victimised by the attention. As one poet wildly exclaimed, You’re going to wreck it for everyone!

Really? How? By mentioning its existence? Is it in hiding? Is it like Irish austerity’s Anne Frank?

Aosdána has only 250 members, many of them elderly, and it seemed unkind of me to be harping on about it when it was clear that the artists simply wanted to be left alone.

But the institution stands as a model for arts funding, and it seems clear by now that in the ideal Ireland that Fine Gael would have, there would only be a couple of hundred funded artists, with the rest fed into the JobPath machine, which needs all the bodies it can get to keep its corporations in clover. It feeds on live tissue you see, and will take any old body: writers, musicians, butchers, bakers…

The silence of funded artists in a situation where unfunded arts practitioners are being sent through a process that is chiefly designed to degrade them, sends out the message that the established arts community are in favour of neo-liberalism’s dividing of the arts community along lines of privilege.

This is too familiar, in an Ireland too often defined along such lines.

The American economist and author Robert Reich in his book, “The System: Who rigged it, How we fix it”, makes a distinction between the old paradigms of “left” and “right” and the situation we find ourselves in today, which he sees as a divide between Oligarchy and Democracy, the two sides currently featuring in running street battles in the US, thanks to real life Goldfinger himself, El Trumpo.

It is a situation where you are either with the systems of economic inequality, the Oligarchy, or you are for Democracy. The two positions are by now mutually exclusive, since, as Reich shows, the Oligarchy acquired the policy-makers a long time ago.

Anyone who goes finger-jabbing about the dangers of “socialism” is badly missing the fundamentals of the new world order.

Quietly supporting neo-liberal policy makers, like our own Fine Gael, who work primarily on behalf of business and corporations, in the hope that political circumspection will guarantee the retention of personal privileges, perpetuates the creation of social inequality through economic systems that are enriching the few at the expense of the many.

The only way to reclaim democratic freedoms lost to neo-liberal policies designed to favour business, is for people to stand unified on behalf of all who are being degraded by the neo-liberal system. Because in time, all will be degraded by that system.

What appears to have happened in Ireland is that an elite inherited not just a republic, but a lower class perceived variously as sinners, rebels, petty criminals and uneducated labourers and skivvies, who were to be watched, managed, corrected and exploited by the elite, much as the vanquished elite had done.

It’s a kind of economic apartheid, helped in its effectiveness by a fee-paying education system that favours the middle-classes, resulting in wealth and privilege being passed on from generation to generation; as poverty and disadvantage is passed on, with unerring precision, further down the social scale.

[Independent Senator] Lynn Ruane, in an article in the Journal.ie from 2018, talks about how difficult it is to even raise the issue of class in Ireland. She writes of how a politician accused her of bringing class into everything:

“This was not the first adverse reaction to raising the issue I had received but I refuse to be made feel like I shouldn’t. The devastating impact of social class in Ireland is not an abstract concept to me and hundreds of thousands of others all over this island. People who have had their lives determined by a class system that they wore born into; by luck and luck alone.”

I met similar resistance following an article on Gerry Ryan when I mentioned, almost in an offhand way, my own working-class background. It was deeply resented. As if I was proffering some unfair gambit.

What came across very clearly to me was the middle-class assumption that disadvantage is totally about cash.

“Today the most important predictor of someone’s future is the income and wealth of the family they are born into.”

And though Reich was speaking of the United States, all neo-liberal states are fractals of the US, and all social inequality works by the same basic globalised monetary principles of neo-liberalism, as was clearly demonstrated in 2008.

Ultimately it is up to those people who are being short-changed by the neo-liberal system to break through their ancestral reticence and start complaining against what is essentially, in Ireland, an entrenched, comfortable cartel of politics, business and landlords that has grown complacent and casually contemptuous in the silence of non-complaint.

10 thoughts on “Eamonn Kelly: The Irish Aversion To Complaining”