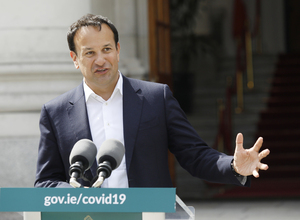 That’s some ultimatum. Taoiseach tells FF & GP to accept austerity as the price of Govt. He’s either not serious about stimulating a fair & sustainable social & economic recovery or he’s not serious about Govt formation. Either way his ultimatum should be rejected. #Time4Change https://t.co/KYKj7NHm7c

Both Mr Varadkar and Tánaiste Simon Coveney said that any programme for government must reflect Fine Gael values, citing fiscal responsibility and the deficit.

The Taoiseach suggested that if the deficit is not tackled – with Fine Gael and Fianna Fáil favouring plans to reduce the deficit in the latter half of a five-year term – this would send out a signal to the markets that Ireland is not serious, as would the postponement of the increase in the State pension age, another sticking point in the talks.

Mr Varadkar is said to have told his TDs: “It won’t be government at all costs.”

Programme for government must include ‘fiscal responsibility’ – Varadkar (Irish Times)

41 thoughts on “I Have Nothing To Offer But Austerity”