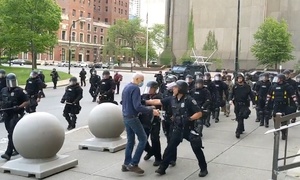 JUST IN: Buffalo Mayor is “deeply disturbed” by the actions of the 2 cops who shoved a 75yo man. He fell backwards, hit his head, and started bleeding. He is in serious but stable condition at a local hospital. The officers have been suspended WITHOUT pay
pic.twitter.com/qbTvXAAPLH