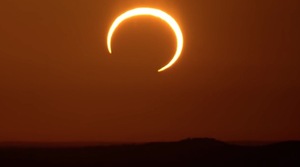 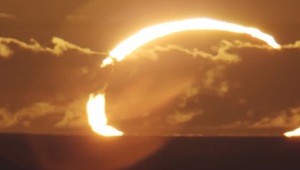 Because the moon’s not normally in the way, as it was on the morning of May 10th, 2013 when seen from Western Australia. To wit:

At times, it would be hard for the uninformed to understand what was happening. In an annular eclipse, the Moon is too far from the Earth to block the entire Sun, and at most leaves a ring of fire where sunlight pours out around every edge of the Moon. The featured time-lapse video also recorded the eclipse through the high refraction of the Earth’s atmosphere just above the horizon, making the unusual rising Sun and Moon appear also flattened. As the video continues on, the Sun continues to rise, and the Sun and Moon begin to separate. This weekend, a new annular solar eclipse will occur, visible from central Africa, the Arabian Peninsula, and a narrow band across Asia, with much of Earth’s Eastern hemisphere being able to see a partial solar eclipse.

1 thought on “Ring Of Fire”