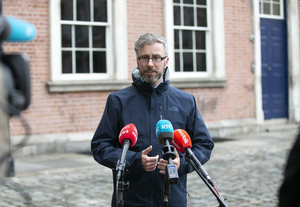 I argued that, as was the approach taken by dozens of other countries, it was stepping stone legislation that would see, within a number of years, the recognition and introduction of same sex marriage

I said it was another in a series of reforming pieces of legislation, that sought to redress the often backwards and repressive societal attitude in Ireland towards sex and sexuality, which itself sought to shame and discriminate against so many of our citizens.

Attitudes that were far different than those that existed on our island at the time of the Brehon laws.

Some Senators (led by Rónán Mullen) wanted to insert a conscience clause into the legislation, seeking to preserve the right to discriminate under the veil of religious belief. Having done Shakespeare’s ‘Hamlet’ as part of my Leaving Cert, I thought it opportune to quote: “Thus Conscience does make cowards of us all.”

I also quoted John F. Kennedy who, in the course of his 1960 US presidential campaign, made a speech on how legislators should determine the common good outside of personal religious belief.

In that speech he said:

“I believe in a president whose religious views are his own private affair … and whose fulfilment of his presidential oath is not limited or conditioned by any religious oath, ritual or obligation … Whatever issue may come before me as president — on birth control, divorce, censorship, gambling or any other subject — I will make my decision in accordance with these views, in accordance with what my conscience tells me to be the national interest, and without regard to outside religious pressures or dictates.”.

Outside of this small clique the Seanad was greatly in favour of the proposed bill. As I spoke David Norris and Ivana Bacik added their support. I was followed in the debate by the current Minister of Finance, Paschal Donohoe, who said some kind things about my speech.

He is now a member of cabinet. Roderic O’Gorman has become Minister for Children, Disability, Equality and Integration. There, I am certain, he will bring an adherence to social justice that will deliver ever more reforming pieces of legislation.

It will undoubtedly be a challenging brief. Nor will it be without controversy. But in Roderic O’Gorman we will have as Minister someone who can point to having already contributed to significant social change in this country.

Within the Green Party his ability, his competence and commitment to social justice has long been known. In recent days he has endured something of a baptism of fire, but he will become stronger for that.

Those of us who know him have an in joke in relation to the affection in which he is held. Perhaps others will get to understand its meaning. It is “In Rod We Trust”.