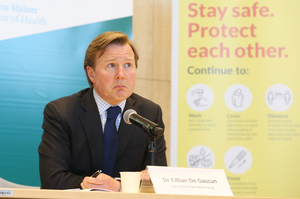 She raised the question after recalling reports that a “significant number” of close contacts of people diagnosed with Covid-19 were refusing to get tested.

They also discussed NPHET’s advice that there should be mandatory quarantining of people entering Ireland at government-run centres or facilities and the “nightmare” Covid-19 transmission scenario that singing at a party can result, on foot of reports about a karaoke party in Limavaddy, county Derry.

Sarah McInerney: “What do we do with those people?”

Cillian de Gascun: “Well I think, I suppose, maybe if we can try and highlight how important it is it get a test, to give us a picture of what’s happening in the community. So a couple of different issues I suppose. We do know that, I don’t know if you’ve had a test result, but we do know that it’s [swab down the back of the throat] quite unpleasant so one of the pieces of work that we’re doing, through the expert advisory group and with HIQA is looking at alternative sampling types so that maybe something we can do that so they wouldn’t necessarily have to go through what is quite an unpleasant experience…”

McInerney: “Is there an argument for making it mandatory?”

De Gascun: “I think, one of the things, I suppose we always try to do and you’re right, the majority of people have behaved very well, have sort of complied with all of the guidance and co-operated so we’re trying to move away from enforcement in that respect but at the same time it may be necessary. Under the public health, under the medical act, my understanding is, so these people who are close contacts, the first thing I should say, these people should be restricting their movements anyway, if they’re identified as close contacts they should be staying at home. So a test in that situation shouldn’t be an additional imposition.

“But it is something that I think the medical officer of health would have a, probably would have, the existing authority to do under existing legislation is my understanding. I’m not a…”

McInerney: “Existing…sorry, existing authority to do what?”

De Gascun: “To probably compel somebody to do a test would be my, if necessary, if it were deemed in the interest of public health.”

McInerney: “Sorry who would have the ability to do that? The chief medical officer is it?”

De Gascun: “Whoever, typically, in public health it would be sort of making the decision. But it comes back to the idea, I suppose, of if you look at the infectious disease regulations and legislation, if somebody is and, again, we don’t use this very regularly, but if people are spreading infection wilfully, then they can be, they can be isolated or quarantined. We haven’t had to do that during the course of this pandemic which is very important and we don’t want to have to do it but at the same time, we don’t believe that people not complying is a massive problem. Some of it, as you said, they have, they’re concerned about the impact that it [test] will have on their business, they’re concerned about maybe the test itself.

De Gascun: “My understanding is, yeah, that the authority would be there...”

McInerney: “So should it be enforced? Do you think that is something that needs to be looked at?”

De Gascun: “I think that the key thing, so I don’t know, there’s an awful lot of, I suppose, information we need as to why people aren’t turning up and I’m speculating now which isn’t probably helpful. But we do know from the data that about 50% aren’t having the Day 7 test, there or there abouts.”

McInerney: “And you’re saying that’s very important because 25% of people are caught up on that date. So is this something that needs to be looked at.”

De Gascun: “Yeah we need…and to be fair, my understanding is the HSE and the HSE are looking at, they’re trying to figure out what the reason for those people not presenting is because, equally, …”

De Gascun: “I think everything needs to be considered because it’s really important that we have the opportunity to track and trace. Track this virus in the community early so those people who aren’t…I would say to people, I would ask them that if they are a close contact, that they would come forward for those few tests.”

McInerney: “Looking through the minutes of NPHET over the last couple of months, it’s quite clear that what NPHET has actually advised the government and what’s preference would be, would be for mandatory quarantine, yes? Mandatory quarantine for 14 days is what NPHET advised the Government back in May and has continued to advise the Government on a regular basis over the last couple of months, restriction over non-essential travel from all other EU countries, a mandatory regime of self-isolation at a designated facility for all persons arriving into Ireland from overseas.”

“At a designated facility now, don’t just go to your holiday home in Clare and self isolate mandatorily for 14 days, that’s what the Government was told back in May, they were told it again on June 11, they were told it again on June 25th. And indeed the language on June 25 in the NPHET meetings says ‘NPHET reiterates the urgency, with urgency, its prior recommendations for legal restrictions to be put in place with regard to overseas travel. Now that was two weeks ago, before we started getting the texts about the American travellers [tourists arriving in Ireland].”

De Gascun: “I think NPHET has been consistent on this since May and I think that’s the public health advice. Obviously, government takes that advice and needs to consider all the other factors that contribute to it and there’s been a number of suggestions that, sort of the legal framework around that would be challenging. But you’re right, that’s been the public health advice since May.”

McInerney: “How do we stop it [in reference to house parties in general as a consequence of the ‘outbreak’ in Derry following the passing around of a microphone]?”

De Gascun: “So I think one of the things, that’s the reason we changed our guidance earlier in the week or made the recommendation to Government that we would restrict the number of people in houses because they’re obviously an uncontrolled setting. Physical distancing does tend to go out the window. We’re conscious of a number of clusters that have been associated with large gatherings in houses. And we’re encouraging people again to, you know, if you want to meet up with your friends, that’s fine, but do it in a controlled manner, ideally do it outdoors. But in the setting of having large numbers of people in a small area, that’s the highest risk setting. And I wouldn’t be so concerned about…Obviously in the karaoke setting, to be honest my concern wouldn’t be the microphone, it’s the fact that you’ve got people singing.

“So we all know that people generate aerosols. There’s been stories of choirs from very early on in this pandemic so singing in an enclosed setting with a large number of people is an absolute nightmare from a public health perspective and from an infection transmission risk perspective.

“So I would say to people: take responsibility. If you’re invited to your friend’s house and you go and there’s a massive crowd, walk away, go home, meet them for a coffee or go for a walk the following day.”

9 thoughts on “Your Body, No Choice”