Taoiseach Micheál Martin says EU Commissioner Phil Hogan should apologise for attending the event in Galway, adding he “should be far more fulsome in his response, and should understand the anger across the country” | Live updates: https://t.co/Vk3CyLuRsl pic.twitter.com/tQgF4rCRV5

Following the Taoiseach’s call for an apology, a spokesperson for Mr Hogan said he would not have attended had he thought that the event did not comply with Government guidelines.

“The Commissioner apologises for the distress caused by his participation,” said the spokesperson. 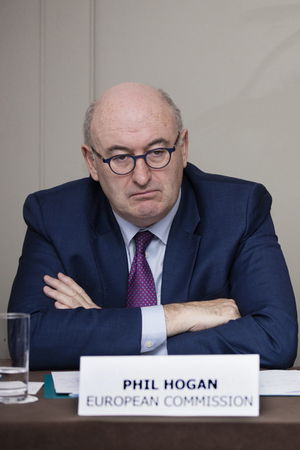 1) I attended the Oireachtas Golf Society dinner on Wednesday on the clear understanding that the organisers and the hotel concerned had been assured [by the Irish Hotels’ Federation] that the arrangements put in place would be in compliance with the government’s guidelines.

2) Prior to the event, I had complied fully with the government’s quarantine requirements, having been in Ireland since late July.

We understand Phil Hogan has been spending some of his time, since returning to Ireland, at a property in Co Kildare. For the last two weeks, Kildare residents have been asked not to leave the county for non-essential journeys. The Commissioner has yet to reply to our inquiries.

On The Shoulders Of Giants