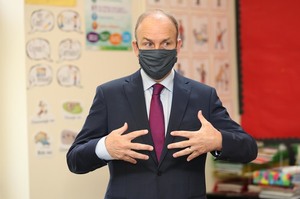 “The office makes the man” is a phrase heard many times before Bertie Ahern and Enda Kenny became Taoiseach.

It stems from the notion that you cannot properly envision someone as a Taoiseach (or Prime Minister or President) until they assume the office, as the trappings of office and the authority that come with role help increase their stature.

After all, very few people, apart from Gregory Peck, Martin Sheen or Oprah Winfrey, can truly act and sound presidential without being it.

Before he become Taoiseach, Enda Kenny was portrayed as too gauche and too hail fellow well met to be a commanding Taoiseach. While the personal traits that make him a likeable and approachable politician stayed with him as Taoiseach the added sense of authority that goes with the office lifted him up. His Dáil performances improved. Helped by a combination of simply sitting in the prime seat, to the right of the Ceann Comhairle, plus having a strong team of speechwriters, from both the civil service and the political world.

The same applied to Bertie Ahern. Prior to him becoming Taoiseach there had been a barely one-dimensional portrayal of him as an anorak wearing north-sider who would much prefer to be watching the Dubs play in Parnell Park than attending an EU Summit. His capacity to use the English language like a Rubik’s Cube didn’t exactly help in persuading critics otherwise.

In reality, Bertie was an intelligent and astute politician who possessed an incisive strategic mind. He saw the importance of maintaining visibility in, and a strong personal connection with, your home place. As with Enda, Bertie got the balance right. He ensured that the trappings of office, the extra staff, flunkies, car, were deployed to increase his authority while skilfully avoiding the pitfall of becoming remote.

Bertie became more styled. His wardrobe expanded and improved. Out went the anorak and the ill-fitting jackets, and in came some well-cut and pressed suits, plus a sharp pair of canary yellow trousers for those walks on the beach with the leaders of the G8.

So, is Micheál Martin set to be the Taoiseach that proves the rule wrong?

I fear he is, but this has less to do with Martin’s political skillset than it has with how the arrangement agreed with his immediate predecessor and ordained successor, Leo Varadkar, has diminished the role.

This is something I warned about in the months before this government was formed. It is one of the many reasons why I trenchantly opposed the Programme for Government and am now an ex Fianna Fáil member.

Agreeing to a rotating Taoiseach while also agreeing to having a beefed up office of Tánaiste, now with an added extra Aide de Camp, plus allowing Fine Gael to hold the post of Finance Minister, condemned this arrangement to being a Fine Gael led government in all but name. It also considerably diminished the authority and effectiveness of any non-Fine Gaeler who went first in the rotating Taoiseach arrangement.

Martin and his team of advisers saw all of this, but still decided not only to consent to weakening the office of Taoiseach, they also insisted on going first. This raises questions about their political judgement and their capacity to distinguish between advancing personal and political ambitions.

But here’s the rub, while Martin entered an office whose authority he had diminished, he couldn’t reduce the level of scrutiny and focus that falls on the one at the top. The office does make the man, but it also throws a massive spotlight on the weaknesses and frailties of the office holder.

The flaws and failings that were not so evident when Micheál Martin was opposition leader, not only became apparent upon taking up office, they were magnified.

I do not think that Martin is the compulsive ditherer, incapable of making up his mind or sticking with a plan, as some portray him. The issue, I fear, is with Martin’s constant need to tell us how much he knows. As I said here a few weeks back:

: “…in any given interview, be it on radio or television, Martin is more likely to remind us that he used to be the Minister for Education, Enterprise, Health or Foreign Affairs than he is to set out a clear vision of what he wants to achieve in government.”

It’s as if there is some inner insecurity, a fear of being found out, which must be masked by appearing knowledgeable and spewing out an array of facts and figures. But appearing strong and in complete control is no substitute for being both and Martin has, to his own detriment, agreed to a model that impedes his ability to do either.

Martin is having all the downsides of being Taoiseach without any of the upsides. This cannot end well – but paradoxically an end is all that is in store for him.

Over the last few weeks Fine Gael sources have been busily regaling folks with a story arising from the reported August 18 clash between Martin and Varadkar. According to the Fine Gael Oireachtas members who relayed the tale to me, the Tánaiste was bitterly complaining to cabinet colleagues about how only the Taoiseach’s advisers seemed to know what was going on and they were not telling anyone. “Welcome to our world”, a Fianna Fáil minister disdainfully responded.

I have no idea if the story is true. The people who told it to me could not know either as they weren’t there, but that isn’t the point. The story may be 100% apocryphal, indeed it probably is, but a lot of people now believe the story is true and there lies the damage.

If acting strong is more important to the Taoiseach than being strong, then it works the other way around too. A few weeks ago I was on a work Zoom call with colleagues, including a former British Labour MP. Just before the call ended the former MP, who has a strong interest in Irish politics, asked me how Ireland’s experiment with operating a joint premiership was going.

They weren’t being facetious. I found myself trying to defend the arrangement, citing the inconclusive election result, to which the former MP said, well I can only tell you what it looks like from where I am, and it looks like a joint premiership with Martin bringing up the rear.

Out of the mouths of babes and labour MPs comes such truths.

Here are a few more truths. Varadkar will not bring this government down. Neither will the Greens – though this may come as news to them. The Greens may walk away as a group, or in dribs and drabs, but either way they are replaceable.

Though Varadkar may find the current set-up frustrating (á la the story above), it is still a set-up primarily designed to suit him. Time is Varadkar’s friend. He’ll be Taoiseach again in two years, if he just bides his time.

Varadkar has the complete measure of Martin and, for as long as Fianna Fáil present Martin as its only alternative to Varadkar as Taoiseach, Fine Gael hasn’t a thing to worry about. That could all change dramatically if, and when, Fianna Fáil TDs wake up and recognise that they need to offer a clear alternative to Martin if they are to survive, individually or collectively.

It is yet another reason why time is not Martin’s friend. His clock has been ticking down and has been since June 27.. He is a lame duck and across his government people are standing by with the hoi sin, pancakes and shredded spring onion.

Martin’s highest point was the moment the Dáil voted him in as Taoiseach. It was always going to be downhill from that moment, but even I never thought the descent would be conducted at as brisk a pace as this.

32 thoughts on “Derek Mooney: We Need To Talk About Micheál”