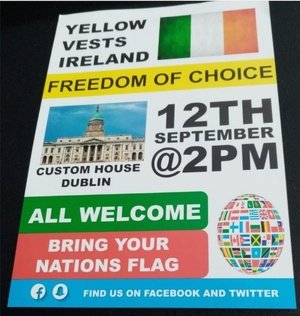 Freedom of Choice rally this Saturday

Ahead of two separate rallies in Dublin this Saturday.

One opposed to Covid restrictions.

The other urging more restrictions (and calling the first group far right racists).

At the core of these protests are conscious and violent far-right forces. At the ‘Health Freedom Ireland’ protest, a small group of counter protesters were subjected to a violent attack by a larger group which had come prepared with weapons such as hammers.

At the same time, these protests have also been able to draw in a broader section of people who may not even know about the nature of the forces behind the protests.

…lockdown measures have caused real psychological and social hardship which is wearing away at people more and more and this creates and opening for those who try to claim the virus is fake or exaggerated using conspiratorial thinking.

Those views are still rejected by the majority who correctly see that they attack the idea of solidarity.

In recent days, a campaign on social media has tried to promote the idea that the numbers of Covid-19 deaths is massively exaggerated because the majority of those who died had underlying health conditions – an insult to the huge numbers of people who suffer with ill health…

Nefarious peddlers of snake oil: How we can defeat the far right (Conor Payne, The Socialist Party)

…At some point, the left made a choice. They chose to side with the medical establishment.

They refused to take the position that science itself is a contested field, where conflicting studies and statistical data can be weaponised to suit competing agendas for the justification and implementation of political objectives.

Of course, they only think this kind of weaponisation is happening on the “conspiracy” side of things; the “real science” relied upon to inform Government decisions is always correct.

Why did they choose to side with the ‘man’? Perhaps they desire greater legitimacy. Or, perhaps, they can’t afford to lose any more legitimacy. They have decided to lead the masses from the ignorance of conspiracy theories into the enlightened defense of “public health”.

…As time goes on, the number of people who are likely to question the Government and media’s response to the Covid-19 crisis will increase. In their eyes, the lockdown measures either don’t make sense or are actually intended for malicious purposes far beyond the curtailing of a virus.

This is a broad spectrum and no two people think exactly alike. It’s not too late for the left to consider the question: perhaps these concerns actually have some validity to them?

The Irish Left’s Problem with the Anti-Lockdown Movement (S&TL, Medium)

Earlier: Our Mask Game Is Strong

Between The Right And A Hard Left