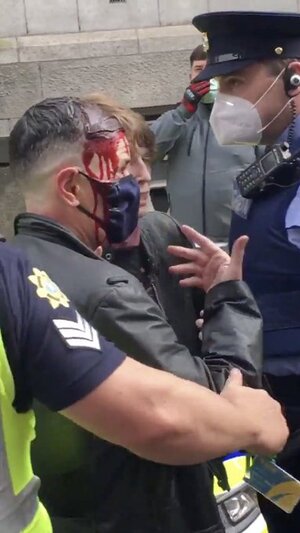 I was contacted last night by a Gda Detective Sgt, who said he had been appointed to investigate my assault. I told him I’ll make a statement as soon as I see any evidence that an investigation actually exists or an arrest has been made. They have the evidence of their own eyes. pic.twitter.com/6kgQVw6gyl

Activist Izzy Kamikaze says she will not speak to gardai investigating an incident on Saturday on the outskirts of a rally against covid restrictions outside Dail Eireann until she sees a garda ‘Investigation actually exist” or when an “arrest has been made”.

Izzy in all fairness, you need to make a full statement if you want to see this thug charged. You hold anything back or get smart you won't get justice. Get him locked up or stop posting about it. I'm fully on your side but you need to give a full ,truthful statement now

A Show Of Diversity

53 thoughts on “‘They Have The Evidence Of Their Own Eyes’”