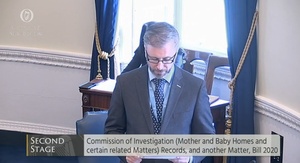 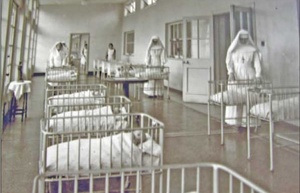 Minister for Children, Disability, Equality and Integration Roderic O’Gorman introducing his bill to the Seanad yesterday seal the archive of  Mother and Baby Homes Commission for 30 years (except for a database on mothers and children detained in 11 institutions which it wants to give to TUSLA)

Breeda Murphy, PRO of the The Tuam Mother and Baby Home Alliance writes:

‘In recent days the controversy over the depositing of evidence related to the Commission’s investigation into Mother and Baby Homes (including the Tuam home) has gained momentum.

The Minister has explained the reasons for legislation being due to the dissolution of the Commission of Investigation when evidence gathered will have to be placed somewhere or destroyed with timeline of October, 2020. The Cabinet and Minister have agreed its best lodged with Tusla.

However, Minister O’Gorman did not address the opportunity that presents of keeping a copy of the entire archive within his own department.

Yesterday when he spoke in Seanad, he admitted the concern expressed among the various communities and groups involved and representations made to local representatives and members of the house, etc.

Ministers and TDs have outlined that they are inundated with emails, (in some cases receiving up to 6000 in the last two days) calls, snail mail and texts as this affects people who have been disadvantaged for decades through no fault of their own.

Survivors and families through a campaign for transparency outlined that the many records relate to their time in the ‘home’ and that indeed their own testimony forms part of the collection.

And of interest to survivors and families and applicable to public interest is the vast collection of administrative data which reveals the extent of the State’s involvement, entry routes and exit pathways, the welfare/care structure, the monies paid regularly from exchequer, maintenance orders, minutes of council meetings, etc. They are all there too.

They go a long way to explaining ‘the system’ that was in operation for decades.

The Minister can, at the stroke of a pen keep a full copy of the archive in his Department. He has told Seanad members that he understands perspectives of those affected and that he will advance comprehensive information and tracing legislation. But that doesn’t guarantee access.

Why can the entire lot not be indexed and archived like any other such important resource?

‘I sat with a Social Worker & a student Social Worker earlier this year for an adoption tracing information meeting. Both of them confirmed they knew MY OWN birth name but they couldn’t tell me because of GDPR.

I’m not angry because I can’t even process it. There’s an approx 2 year waiting list to contact the birth mother to ask permission to share my birth name, which can be refused. In the case of her death the decision is passed to next if kin for them to decide on her behalf. We have no rights. That’s not even half of it.

And in case it wasn’t obvious – there’s also absolutely ZERO rights to any medical history unless permitted by the birth mother or her next of kin. I have no family medical history for myself, or to pass on to my children.’

That is not the fault of the social worker but of the policy makers who have not amended the legislation. There was a time last year when it looked as though any such records would be sealed for 75 years under the failed Retention of Records Bill. To a person who survived those institutions now in their 70s or 80s (as is the age of many Tuam survivors), it’s meaningless.

Minister O’Gorman is a law lecturer who understands the significance of legislation to provide access. Even if he is unsure, even if he has misgivings, there is nothing to stop him accepting the data and keeping a copy.

There was political will in the Seanad yesterday  to tackle this once and for all.

Senator Ivana Bacik explained the Labour party could not support the Bill currently given the rush to get it through without commitment provided as to future access.

Senator Michael McDowell raised the issue of privacy rights afforded to those who contributed to the Confidential Committee.

Senator Alice Mary Higgins wants assurances as to how and where the archive material will be stored and stressed the need for a timeline, mentioning the importance of providing closure.

Senator Aisling Dolan said she was fortunate and privileged last year to receive testimonies when our Alliance presented to the 39 Galway County Councillors where she was then a member.

Senator Gerard Craughwell spoke movingly of young women leaving his own community for a period of time who they knew had given birth to a child. His words ‘no one ever asked where they were, we all knew. Nobody ever spoke about it”

Senator Mary Fitzpatrick urged the Minister to provide an assurance that all living survivors would gain access to their own data and to house the archive in a suitable repository such as the former Magdalene Laundry in Sean McDermott street.

Senator Lynn Boylan pointed out that the Government is not bound by the 2004 Act but has legal experts who are able to legislative for amendments. And some senators tabled up to 20 amendments to the Bill in its current format.

We have the opportunity, the capacity and the courage as citizens to lead on preservation and ultimately access of records related, including records held by Religious Institutions.

This is our history. We must ensure it doesn’t get hidden away because the people who suffered most – many who never made it out – and some who did are no longer with us deserve so much more.

We owe it to them just as much as survivors we battle with today to make sure they too are remembered as central to the case for justice. After all, it was their ‘absence’ in 2014 via Catherine Corless’s research, that prompted the Government to act in the first instance.’ 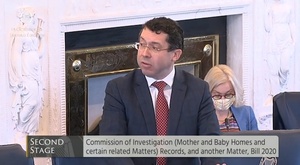 During the debate on the Commission of Investigation (Mother and Baby Homes and certain related Matters) Records and another matter, Bill 2020: Second Stage, Senator Ronán Mullen followed a number of speakers critical of the Catholic Church’s role in the homes.

Senator Ronán Mullen: “I would like to say a little about how we talk about the past. There was harshness in our past but when we think about the decade of commemorations that we are going through, we see how dangerous it is to get into the business of assigning blame. Senator Dolan referred to the Catholic Church and people talk about the dark periods in Irish history.

Are people open to recognising that even though there was harshness, there were people who had positive experiences of how they were treated? Are people open to considering that some who worked in these institutions had the best of intentions? Do people think that things were significantly better in other countries? Do they think that the church institutions involved were only doing it for money or the sexual control of people’s lives?

Is it not the case that, in the context of a poor and difficult society, some, many or most of those people were trying to be a part of a caring agenda? Are people interested in that kind of nuance or do we all want to be running with the pack in condemning the past? It is easy to condemn the past because the people who were involved are either dead or weak and voiceless now.”

Senator Lynn Ruane: “This line of debate is insulting to the survivors about whom we are speaking. We are speaking about a specific area of the church and institutions. We are not here to defend something that clearly happened. It is disrespectful.”

Senator Ronan Mullen: “Are we willing to talk about the families, for example, who did not show love? I ask that people be less preoccupied with anger and blame, and to think about the hypocrisies of the present. Senator Warfield mentioned direct provision. I could ask how we treat unwanted babies in the present. Does our law not now sentence them to death in many situations? People think that is an inconsistent…”

Senator Ronan Mullen: “Of course it is shameful.”

Senator Mary Seery Kearney: “That is shameful commentary in our national Parliament.”

Senator Ronan Mullen: “Is it not interesting when somebody has a different perspective about what justice to children involves-…”

Senator Mary Seery Kearney: “It is not different, that is shameful.”

Senator Lynn Ruane: “This is not about Senator Mullen’s agenda. It is about the survivors and the Senator is making it about his agenda and is using the backs of survivors to do so.”

Senator Ronan Mullen: “I also care about survivors. I have explicitly stated that I want to support people who want to find out more about what their experience was. I just ask colleagues to remember that this is a kaleidoscopic situation where many people have different stories to tell. If we are only interested in some stories, that marks us down as some kind of hypocrites. That is all I will say.”

A Clash of Civilisations

50 thoughts on “Burying Away Their Past And Our History”