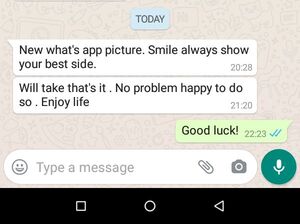 In the latest dispatch from his often calamitous journey to find meaningful love in lockdown, hopeless romantic FluffyBiscuits writes:

The undertaker was a handsome devil, charming and flattering. After two cancellations and with me having a three strike rule he sauntered up for a coffee Sunday two weeks ago.

Nothing out of the ordinary except after four hours he is full on charm offensive. He bleats at me, “Im falling for you, I could fall for you,” interspersed with other random musings. At this point I picked a point on the wall and stared, a tactic I picked up from The General after reading his biography. Stare at one spot and say nothing.

The light faded and Mr Undertaker made his way home. That week he appeared to have gone to ground (see what I did there!) ,but he continued with the flattery, cancelling again on the Saturday following so I told him to take a hike. The next day he rings, apologises profusely and tries to flatter again. His job is all last minute. Anyways he ends it by saying: ‘Text you and we can chat about meeting up’.

Already being on edge with lockdown and not letting my guard down, I mentioned the situation to friends and this is where I learned about love bombing. A term that a person floods you with so much affection and then tries to withdraw it so you crave more. A form of control.

Little things this fella had mentioned clicked into place “I don’t like your beard”..” those clothes don’t suit you”…I had told him to sod off on those occasions but what if I had not been independent minded? My mental health had already taken a battering with lockdown pushing me to seek out a counselorand think my judgement had been impaired. Friends though through conversation spotted what I had mentioned,the chap was a control freak.

Last night I was chatting to a pal when my phone buzzed. This gobsh*te didn’t like my new profile photo and then an hour later when I didn’t respond tells me “Will take that’s it . No problem happy to do so . Enjoy life”…I just wrote “good luck”. Guys like this want you to fawn over them. Love Bomb, defused and sent packing!

Previously: ‘I’m Calling About The Car’

Cheating Cheaters Cheat Us All: Part 2

‘I’m Calling About The Car’

20 thoughts on “How To Dismantle A Love Bomb”