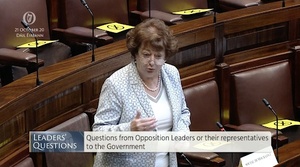 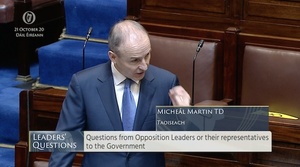 Further to the contact-tracing brouhaha…

“I’ve been in touch with the people directly responsible and overseeing the whole testing and community testing within the HSE and this is…what I’m imparting here to you is I’ve been informed by the HSE in terms of this.

“There is no issue with resources, in terms of the government side, in terms of funding all of this because it has to happen.”

“Taoiseach, we know that the public will play their part but the State has to play its part. We need absolute assurance that we’re going to have a system that’s going to be in place after this lockdown that we can feel confident about.

Two weeks ago, we heard a senior public health person having to take to the airwaves, saying just how under pressure they were. It was no surprise that what happened at the weekend happened.

“It was predicted by virtue of the fact that they were saying that they were nearing collapse. We can’t have a scenario then where we find out something, and you did find out when somebody texted you an article in The Irish Times, I would have thought that you be fully informed by the people who need to inform you of something that is going to be, that is a big problem. 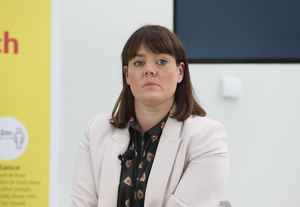 Niamh O’Beirne, National Lead for Testing and Tracing, told RTÉ, that more contact tracers are being hired but admitted:

“Over the summer, we had released back the staff from contact-tracing to frontline and very important frontline work and university work where people had been working or supporting our tracing….”

“Over the weekend we did not have enough staff to deal with demand and that’s what created the backlog of cases which we’re now trying to deal with.”

3 thoughts on “Trace The Blame”