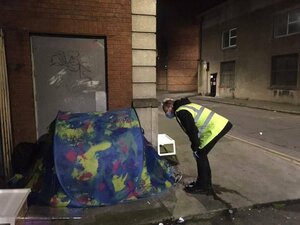 A young girl died, alone in a tent Saturday.

How many people have actually died in homeless services this year? pic.twitter.com/zo1ls7DEob

The discovery of a woman’s body inside a tent at Lynch’s Lane, Ronanstown, Clondalkin last Saturday brought to more than 50 the number of homeless people who have died this year.

As of Monday night there were 133 homeless in Dublin and we are not even seeing the full extent of what is happening,” explained [Independent councillor and CEO/ Co- Founder of Inner City Helping Homeless] Anthony Flynn

He revealed that homeless people don’t feel safe in many privately funded hostels and shelters, “as many are the scrapping of the bottle of the barrel with too many people sharing sleeping arrangements.

Cllr Flynn added: “Despite advice from the Chief Medical Officer Tony Holohan for homeless people to seek shelter due to fears over their health and Covid-19 they feel safer on the streets because of poor conditions being provided.

“They don’t want to raise their chances of contracting the virus living in cramped and overcrowded conditions and they genuinely feel more secure going back out on the streets.”

12 thoughts on “Death In Isolation”