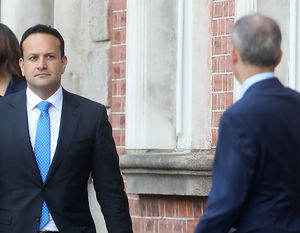 From top: Taoiseach Micheál Martin (right) is under fire from members of his own party over his handling of Tanaiste Leo Varadkar’s GP contract controversy; Derek Mooney

I’m sure many of you were shocked as I was to learn last Friday that Sinn Féin doesn’t have confidence in Leo Varadkar.

Seriously, who’d have thought it?

Who’d have imagined that the main opposition party, a party that sees the future of Irish politics as a polarised race between itself and Fine Gael, would not have confidence in current Fine Gael leader?

As I explained in my first piece here last week there is no doubt that the Tánaiste has not gone far enough in his apology or his assurances about how he conducts the business of government. Some of the explanations he offered last Tuesday were so juvenile and feeble that it was shameful to see them sent out alone without a guardian.

Many who will vote confidence in Varadkar on Tuesday night will do so with no more trust or confidence in the man now than voters had in him last February.

But, as President-Elect Biden likes to say, here’s the deal… unless substantial new evidence emerges between now and the time the division bells are sounded, the vote will be an entirely pointless exercise, designed more to embarrass Fianna Fáil and the Greens than to censure the Tánaiste.

Like it or not, this saga is not really capturing public attention. It is not that people don’t care, it’s just that they look at this and wearily conclude that (a) they are all at it, (b) when it comes to leaking Sinn Féin would be no better or worse or than Fine Gael, (c) we have much bigger things to be focused on now… or a mixture of all three.

Voters are not naïve; they know that for some politicians leaking is less an occupational hazard and more a career necessity. They see political leaks as largely, though not exclusively, falling into one of four/five categories. There are several more – but let’s stick with the principal ones here.

Category 1 covers leaks made to embarrass other parties and put your own side ahead. The second category concerns leaks made against party colleagues to help advance the leaker’s political career, though the motivation can be simple jealousy. I could give many recent examples of both, but I promised to keep this week’s piece under 1200 words.

The third group features leaks that have no direct benefit for the leaker apart from storing up brownie points with journalists. This is the chips in the bank approach where the leaker hopes to have something to cash-in with the next time they land themselves in trouble.

As Bernard Woolley, the private secretary in Yes Minister responds when his minister admit that item appearing in the newspaper was the result of a confidential press briefing, not a leak:-

Oh, that’s another of those irregular verbs, isn’t it? I give confidential press briefings; you leak; he’s been charged under Section 2a of the Official Secrets Act.

This is the difference between an authorised disclosure of information and an unauthorised one. The Taoiseach or minister of the day can authorise the release of information or documents, but that is not something they usually do by stealth without any reference to trusted confidents.

It is certainly not something they do when, as the Tánaiste said last Tuesday, they had agreed not to publish the contract as:

“The IMO wanted to do it differently and wanted to hold meetings around the country to consult and engage with its members before doing so.”

So, the Taoiseach knew the IMO believed their chances of getting the contract passed would be bolstered by not publishing it before they consulted members. Why leak it, then?

The Tánaiste says it was to show that there was “nothing in it worth opposing or agitating against”. Thus Leo Varadkar would have us believe his one and only ever leak falls into a fourth category of leaks: leaks made in the public interest.

Category 4 leaks are rare. They are often the absolute last resort where all other avenues have been explored and exhausted.

Sinn Féin says it does not buy that… but stops far short of saying this leak belongs to a fifth category of leaks: those made for corrupt personal gain. This fifth type is unacceptable under all circumstances. It should lead not just to a vote of no confidence, but a full criminal investigation.

Writing here in advance of the Tánaiste addressing the Dáil I said that it was bad politics for him and the Taoiseach to downplay his action as a mere lapse of judgement.

It was more than that. It was wrong. As Jim O’Callaghan TD commented on Twitter after the Tánaiste spoke:

Every politician knows it’s wrong for a minister to send a government document with “Confidential Not For Circulation” printed in big letters on its front page to someone not authorised to receive it. Let’s not demean ourselves by pretending otherwise.

It can be difficult, if not downright impossible, to come across as truly contrite in the Dáil chamber in the face of political game playing and point scoring. But the Tánaiste couldn’t even be bothered to feign contrition last Tuesday. It is a point which Deputy Catherine Connolly highlighted when she directly asked:

“When did the Tánaiste realise that he had made an error of judgment?”

If anyone came close last Tuesday to posing a Howard Baker-esque ‘What Did the President Know, and When Did He Know It?’ question, it was Deputy Connolly. But while this is serious, Watergate it is not.

The other reason this is not Watergate is because in Watergate the wrongdoing was on one side only. Those who came looking for answers and answerability on the break-in and cover up came with clean hands. Is that the case here?

As I said last week “The wrongs done by one [side] do not distract from those of the other”. Sinn Féin has mishandled the issues relating to its finances just as much as Varadkar has mishandled his leaking of the IMO contract.

This isn’t whataboutary, it is simply a reflection of the fact that the Sinn Féin leadership have a range of awkward and difficult questions to answer on its finances.

These go from how it embraces partition to accept a £4million donation in the North, avoiding the 26 counties’ standard in public office donation limits, to why it takes seven months to return £30k erroneously received from Northern Ireland’s emergency COVID-19 fund for small businesses – and how come that only happened a few days before the BBC Radio Ulster Nolan Live show broke the story.

If the media hadn’t pushed Sinn Féin on the three £10,000 payments would the money have remained in the bank accounts of Sinn Féin, assuming it hadn’t already been spent? How are these accounts managed and run? Who controls them?

Rather than answering the valid questions facing both, they’ve opted to poke each other in the eye. Not that the damage will run too deep. Sinn Féin and Fine Gael are the best of enemies. They are each other’s best nemesis as they set about cannibalising the parties around them and hollow out the political centre.

26 thoughts on “Derek Mooney: A Leaked History Of Leaking”