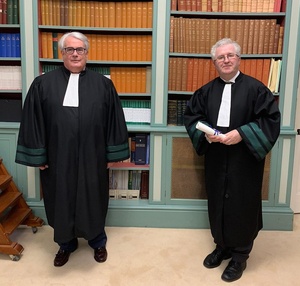 There has been speculation in the Law Library, where barristers are based, that the Chief Justice Frank Clarke may resign in protest if Mr Woulfe does not go.https://t.co/V7BOUPqJxu

Didn’t see that one coming.

And such a pity Shane Ross’s tell-all book doesn’t in fact tell all about the reason ex-FG and now Chief Justice Frank Clarke recused himself from the appointments panel for Mary Irvine’s appt to prez of High Court. https://t.co/LBsmOGGs5v

The Chair of Judicial Appointments Advisory Board, Justice Frank Clarke does not come out of this well either. He recommended Woulfe be appointed, didn't tell the Min about other applicants, now he's advising Woulfe to resign. Judges choosing & judging judges aint good governance pic.twitter.com/Us2geHlzag

18 thoughts on “Though The Heavens Fall”