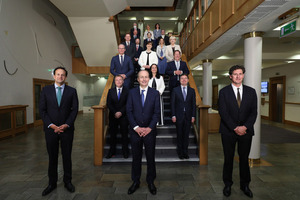 From top: The newly-elected Cabinet of the 33rd Dáil at their first  meeting in Dublin Castle on June 27; Derek Mooney

Indeed, the continuing out-workings of Brexit; Brexiternity as Denis MacShane has dubbed it, will keep several future governments busy over the decade ahead.

Although both Covid and Brexit will dictate a sizeable portion of the policy and budgetary agenda for 2021, it is hard to see either having the capacity to destabilise the government, though this may be truer of Brexit than Covid-19.

Despite failures on nursing homes, mass and rapid testing and contact tracing, the government has retained broad public support for its handling of the pandemic response.

Only a serious delay or problem with the rollout of the vaccine might impact the government. This may be the reason the Taoiseach has been eager to manage expectations on delivery of the vaccine.

He has suggested in recent days that it may be well into the summer, even August, before we get to a 60-70% level of vaccination. (There may also be another more worrying reason if this Der Spiegel report is correct)

Though a political necessity, an Taoiseach’s management of expectations is also a double-edged sword. While he will see it as prudent to under promise now in the hope of overdelivering in the future, it also risks increasing the already evident public fatigue with restrictions.

Though Covid and Brexit will remain major issues for the government in 2021 the biggest political problem facing it remain internal. Indeed the easing and normalising of the aforementioned external pressures as 2021 progresses may facilitate the internal one coming more clearly to the surface.

Counter-intuitively, though the three government parties combined still command 50% plus support in the polls, the government itself is only just holding itself together. This week we were reminded that, despite Fianna Fáil’s considerable internal problems, the Green Party remains this government’s Achilles Heel.

The fact that the government had a political difficulty over CETA, the trade agreement with Canada is an indication of how easily the Green’s position in government can be unsettled.

How could an EU trade deal with Canada… yes, with Canada… so seriously disrupt the government’s Dáil agenda this week?  I mean… it’s Canada… they’re the nice ones, aren’t they? Is there a Terrance and Philip clause in CETA which we missed?

The fact is that this trade deal has been up and running since September 2017. I know the Greens opposed CETA back in the day… but, that ship has sailed. CETA is now a reality. We have enough real issues facing us today without running slow motion replays of settled ones.

More significantly, how did the Green leader, with his entourage to rival a 18th century Bourbon monarch – albeit one of a small Duchy, fail to see that a vote on CETA would cause a problem?

So far this year we have had Green TDs, including an office holder, abstaining on government votes. As Ian Fleming says on the opening page of Goldfinger: once is happenstance, twice is coincidence and three times is enemy action. If the Tenant’s Rights Bill was the once and CETA is the twice… then 2021 could be the year when individual Green TDs and office holders decide they can no longer stand the pressure and quit government.

Up to now the big worry among Fianna Fáil back benchers has been Varadkar doing a cut and run the moment he thinks it safe to hold an election, an election already being framed as a stark binary choice between Fine Gael and Sinn Féin.

It is a worry actively encouraged by Micheál Martin’s depleted retinue of parliamentary loyalists, so depleted that the non-office holders within it are on the verge of no longer being a plural. A move to oust Martin, they argue to their disgruntled colleagues, would send Fianna Fáil into a prolonged leadership battle which, in turn, would encourage Varadkar to press the election ejector button.

It was a weak argument at best. Because it fails to recognise that the growing indiscipline and incoherence of the Green party is an even greater threat to the government’s stability and continuity than Varadkar’s all-consuming ambition.

So, while Martin’s minions try to scare Fianna Fáil backbenchers with imaginary stories of how heaves can precipitate elections, the TDs in question are increasingly focused on the real dangers of Fianna Fáil facing an election triggered by the Greens in 2021, or early 2022, and stuck with Martin as leader.

These fears were heightened by Martin’s stunning we didn’t bail out the banks claim. It is impossible to overstate just much real damage Martin inflicted on his own leadership with this major unforced error.

Looking back at the remarks it is now obvious that they were not just off the cuff. The Taoiseach seemed to be spoiling for a fight before the Christmas break. Could it be that he saw Boyd Barrett’s comment as a welcome opportunity to unburden himself on something he has been reflecting on a lot?

But Copernicus Martin’s mission to tell everyone that everything they thought they knew about recent political history was wrong, was about end up with a stratospheric own goal.

His framing of his Wednesday response to Deputy Boyd Barret curiously echoes the one made a day earlier when tackling Deputy Mick Barry on the Debenhams dispute.  Addressing Deputy Barry in the Dáil on Tuesday, the Taoiseach said:

The Deputy is an extraordinary propagandist and a populist. He has led people up the hill without levelling with them about the facts and what they could expect

The following day the Taoiseach opened his response to Boyd Barret saying:

So, here we have a Taoiseach nobly seeing it as his political and civic duty to tackle and expose the populist hypocrisy of the left, but then proving that he is singularly ill-equipped and ill-suited to do the job.

The Taoiseach was right to try to expose their empty populism, but it is job for people with well-honed political instincts more in tune with the public mood than his.

The irony was not lost on some that Martin, who spent most of his time as party leader trying to avoid defending the actions of past Fianna Fáil governments, came a cropper with his first attempted defence of one.

It’s therefore unlikely we will see him attempt another defence of his party’s legacy anytime soon. The irony of this is that recapturing the pragmatic and approach of his predecessors, from Lemass to Lynch to Ahern, one that is in tune with the aspirations of centre ground voters, is Martin’s only hope of being in his current position when I am writing this piece, this time, next year.

Derek Mooney: Mandate Is Not Another Word For Majority

10 thoughts on “Derek Mooney: That Was The Year That Was”