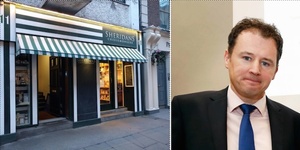 A spokesman for Mr McConalogue said he had followed all public health guidelines after his return from Brussels where he was on Government business last week.

The Donegal TD was spotted on South Anne Street, just off Grafton Street, Dublin, about lunchtime on Tuesday in the queue at Sheridans Cheesemongers…

Asked about the appropriateness of the minister shopping in Dublin on Tuesday afternoon, the spokesman said: “He followed the rules, he followed the guidelines, he was doing his confirmatory test a few days later and he was not required to restrict his movements in that time.

“There is no impropriety here and he was wearing a mask at all times yesterday [Tuesday].”

So @rtenews were telling lies for him at 6 last night. Get the alibi in first.