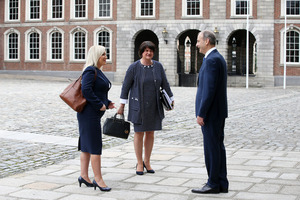 It’s never the little too little that hurts, it’s the little too much. This was Sean Lemass’ famous advice to aspiring politicians. Keep your own counsel and never say more than you need too, especially when what you are saying is not fully thought through.

Though the advice comes from an age before social media and rolling news, it applies as much today as it did in the 50s and 60s.

It is such a profound piece of political advice that I assumed I had mentioned it here before. But a word search of the Broadsheet pieces I have written over the past 5 years tells me that I’ve only quoted it here once before. That was last November in a piece I wrote about the Shared Island Unit. In it, I suggested that the Taoiseach still “has an awful lot to learn from Lemass’s practical application of vision to action.”

Listening to the Taoiseach’s lengthy Saturday morning interview with Brendan O’Connor on RTÉ Radio One, it appears that it is a lesson he still needs to learn, and urgently.

There is a major risk in doing a 50-minute interview when you only have 30 minutes of solid material. The temptation is to fill the gaps by musing on some interesting briefing material you recently saw.

While it is good to know that our Taoiseach likes to think about things it is still disconcerting to hear that process play out through your radio on a Saturday morning.

About 26 minutes into the interview the Taoiseach, who had already attributed our high transmissibility rates to the new UK Covid-19 variant, said that it was his understanding that the North doesn’t test for this new variant. He then doubled down on this claim saying that he could not fathom this approach and that Northern leaders had told him the variant just wasn’t an issue there.

He implied his government’s efforts to create an all island response to the pandemic had been frustrated by the political difficulties within the Northern Ireland Executive.

Micheál Martin is not completely wrong when he says there are political divisions in the NI Executive on Covid. There clearly are. The Northern response has often been the victim of political brinkmanship at the Executive between the DUP and Sinn Féin, as we saw last November when public wrangling trumped expert medical advice.

But neither is he completely right. He went way too far. He said something he need not say, for no purpose whatsoever, apart presumably from filling airtime and taking a bit of heat off himself.

Listening to it live I had the constant impression that, like us, the Taoiseach was hearing a great deal of what he himself was saying for the first time. O’Connor didn’t draw these comments out of the Taoiseach, the Taoiseach offered them up.

O’Connor had the wit to keep his interventions short and concise and not jump in. He permitted the Taoiseach to just keep talking, to fill all the silences and – perhaps – to go too far. He did.

So, what did the Taoiseach say that was so wrong? Well, for starters, his assertion that health authorities in the North do not test for the variant doesn’t stand up. Within minutes public health expert, Dr Gabriel Scally was tweeting that the Taoiseach was not being briefed properly.

More seriously, the NI Health Dept yesterday published a detailed statement responding to what it called a “misleading commentary”. This is not how anyone should wish to see the Taoiseach’s thoughts described in an official publication.

Their statement not only set out what it was doing to identify new variants, including the B.1.1.7 variant a.k.a. the “UK variant”, it also made it clear that whole genome sequencing has been in place in NI since late April.

Why the Taoiseach decided to pick this moment to be publicly critical of the North, just when Northern Ireland is beginning to move ahead of us in its pandemic response is a mystery.

Northern Ireland has vaccinated twice as many of its population as we have in the 26 counties (1.9% vs 0.9%). As of last Wednesday 166k doses of vaccine had been administered in Northern Ireland, compared to 121k here, though the daily NI vaccination rate did fall steeply over the weekend. In terms of infection spread, rates on the two parts of the island are declining in parallel is similar. Yesterday, 1378 tested positive for Covid in the Republic, compared to 433 in Northern Ireland. (The NI population is approx. 37% of the Republic’s).

While I’m willing to accept that it was not his intention, the Taoiseach’s remarks did give the impression that problems in agreeing an all-island approach were solely Belfast’s fault.

This is strongly denied by all sides of the political divide in Belfast. They have long suspected that Dublin was deflecting from its own failings at ports and airports by portraying them as the weak point. On Saturday they heard the Taoiseach say as much live on radio.

They feel the fault lies here, not there. Last November Northern Ireland’s Health Minister, the former UUP leader Robin Swann MLA, said he had written to his southern counterpart Stephen Donnelly four times since July 2020 requesting co-operation on contact tracing, but to no avail.

Swann wanted to access passenger locator forms filled in by people arriving in Dublin Airport but travelling on to Northern Ireland. Such access would allow Northern authorities ensure that these passengers self-isolated when they crossed the border.

The response from Dublin has been the same for over six months: there may be data privacy issues which we are working on. Last year, I documented just how slipshod the contact tracing system at Dublin airport was.

Martin has succeeded in uniting the DUP and Sinn Féin against him. The two parties are now united in refusing to serve as Martin’s scapegoat.

That, bizarrely, is the upside to the debacle.

Sadly, there is also a downside, one that has serious long-term ramifications.

Martin, who has spent the past few years trying to build trust with unionism, has done real and lasting damage to that nascent relationship. He allowed his unformed thoughts to get ahead of the formed ones and sounded like he was offloading responsibility on to the NI Executive.

Martin, and his external muse on Northern politics, had hoped that unionists would see the Cork-man as someone with whom they could do business. Today, the DUP and the more moderate UUP, see him as weak, equivocating, and two-faced. They saw Saturday’s remarks as gratuitous and ill-informed.

The Taoiseach’s own words have undermined the hopes he once had that unionism would, in time, engage with his Shared Island Unit (SIU). They were the little too much.

But… does this really mean the Shared Island Unit is critically damaged? Hopefully not. As I explained last November, I worried that the Taoiseach was hampering the usefulness of the SIU from the outset by insisting that it could not talk about the constitutional question.

Martin very consciously put constitutional matters, including a unity referendum, outside of the SIU’s purview in the hope that keeping this item firmly off the agenda would show unionism that he could be trusted and that they could engage with the Shared Island Unit without compromising their position.

I thought the logic of his position was flawed. On Saturday, the Taoiseach took his own logic and strangled it for no purpose.

As yesterday’s Sunday Times/Lucid Talk poll shows, support in Northern Ireland for a referendum on unity is building. The near inevitability of a second Scottish independence referendum can only drive that impetus.

My own view, as I outlined here a year ago, is that holding a referendum on unity within the next 4-5 years would be unwise, but so too would stymying an informed debate on what a future, all-island, Ireland could look like.

Whenever it is held, and it is increasingly likely that it will be held, as DUP MP Gavin Robinson said last week it will raise just as many questions for people on this side of the border as it will for those in the North, a point well made yesterday by Fianna Fáil’s Jim O’Callaghan.

An Taoiseach will have to work hard to undo the damage he has done, but he may also have given himself an opportunity to get his Shared Island Unit back on the rails, by accepting today’s new reality and allowing it to engage on constitutional issues. Maybe some good can come from his little too much.

Derek Mooney: Of Dead Cats And Ducks, ‘Tis Of Thee We Sing’

4 thoughts on “Derek Mooney: Has Martin Thrown His Shared Island Unit Under A Bus?”