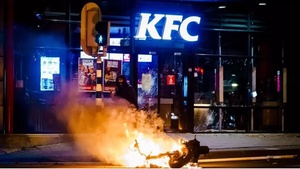 Police arrested at least 70 people after rioting broke out for a third night around the Netherlands on Monday, after weekend protests that were initially linked to dissent over a government decision to implement a nighttime curfew.

But the motivation behind vandalism and other incidents Monday in cities ranging from Rotterdam and Amsterdam to smaller centres of Haarlem, Geleen and Den Bosch was no longer clear, with rioters overwhelmingly in their teens.

…The curfew, the first in the country since World War Two, was imposed after the National Institute for Health (RIVM) warned a new wave of infections is on its way due to the “British variant” of COVID-19, though numbers of new infections in the Netherlands have been declining for weeks. Some 4,129 new cases were reported on Monday, the lowest number since Dec. 1.