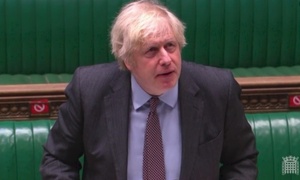 Mr Johnson was answering questions from the DUP’s Ian Paisley who asked what he was going to do when he realises the EU, as Mr Paisley said, will do nothing to help Northern Ireland.

Mr Johnson said he “utterly shares the frustration” of how the EU Commission seemed to call to use the protocol in such a way as to “impose a border contrary to the spirit of the Good Friday Agreement.

He said: “we will do everything we need to do to, whether legislatively or indeed by invoking Article 16 of the protocol to ensure that there is no barrier down the Irish Sea” and businesses can continue “unfettered between Northern Ireland and the rest of this country”.

Yesterday: I Von Der Who It Was

Unruly Hair To The Throne