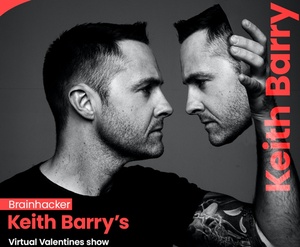 The votes are in.,

Last week, with a pair of tickets to see Keith Barry LIVE on offer, we asked you to name your most mentalist experience.

After much debate, ‘Mr Sinister’ was chosen for recounting the following epic mind-bending incident:

‘Saw Derren Brown in the Olympia once. For the interval, he put a giant fishbowl on the stage and asked everyone to take a pen and paper from the ushers and to write a question down. Then put your first name and row that you’re sitting in on the outside, and he’d pull them out and be able to guess the question and then guess the answer as well.

Some of the questions were out there…first guy up asked what his mother’s name was…turns out it was Dympna. Good old DB had a great time trying to get his head around that.

I was pulled out third, and a different usher handed me a mic. He guessed correctly that my question was about sport…”In what year were Shelbourne FC formed?”…1895, as it happens, is the correct answer.

“So, David, I’m guessing you’re here with your Mrs?”

“yes, me and the girlfriend”

“And how long has she been pregnant?”

Everyone, including David, gasps!

“um…eh, well…we’re not sure cos we haven’t told anyone yet”

“Can I speak with Mrs David?”

*mic is handed over*

“Hiya, this is David’s bird”

“Anyway, moving swiftly on, I can tell that you, David, have a pet dog…named Tyson?”

A shout goes up from the other end of the row:

“You’ve got the wrong David!”

David number 2 gets handed a mic

“So, real David, are you here with your missus?”

“Yeah, and she’s pregnant with twins and I have a dog called Tyson”

“Well, David, would you prefer boys, girls or one of each?”

“Hmm, well I better not say too much, then, lets hear it for Sissy Mickey, I mean David number 2”

I’d love to have spoken with one of the other names pulled out of the hat, to try and see if it was possible to figure out how he did all of it. I never let on to anyone, even my brother who sat beside me in the audience, what the question was.’

Last week: Look Into The Eyes, Not Around The Eyes

Look Into The Eyes, Not Around The Eyes [Extended]