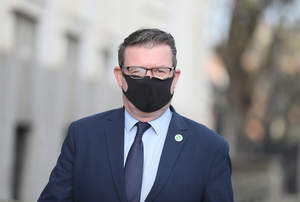 Labour Leader says Government don’t have a strategy to “absolutely” suppress the virus. Party wants an “aggressive suppression” approach. Says it’s a choice between locking up “our own people” or quarantining those entering the country @rtenews pic.twitter.com/iXUtcf4Zfk

He’s had enough of mild-mannered suppression.

18 thoughts on “Power Is A Vaccine”