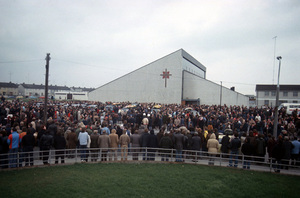 The coffins of four young people who died in the fire in the Stardust disco on the morning of St. Valentine’s Day, 1981, leave the church the Church of St Luke the Evangelist in Kilmore on Dublin’s northside on February 18, 1981

This Sunday marks the 40th Anniversary of the Stardust Fire in which 48 young people lost their lives.

Via Aoife Moore in the Irish Examiner [full article at link below]:

…The inability of the State to look at those it has failed in the eye until they have dragged out every humiliating second of their own procrastination is one of the most profoundly repulsive and familiar things we have come to expect about official Ireland.

The Stardust families will get their apology too, eventually. Some Taoiseach will stand in the Dáil chamber and somberly say that we had failed them.

That we should not have forced them, for 40 years, to march on Merrion Street and bang on doors and fill out postcards, that we should have listened in the days after the fire, to the witnesses, the fire service, the survivors, and their parents. We were wrong and we’ll probably be sorry.

The collective “we”, which did so much legwork when “we” apologised for the mother and baby homes, will be ushered back on to the Dáil floor once again when “we” eventually apologise to these families who were so traumatised by the worst atrocity in the history of the State.

The reality of Ireland in the case of the mother and baby homes, the Magdalenes, the industrial schools, and the Stardust fire is — there is no “we”.

…There is no “we” when it comes to the State, because not everyone in this State is considered equal.

The families of those who died in the Stardust fire are confident that had they come from a different part of Dublin, justice would have been forthcoming a long time ago, and who can blame them?

Those who don’t matter don’t deserve answers, and those without power don’t receive them.

Ireland has always been kindest to those whose background demands respect.

If you don’t want to take my word for it, ask someone in direct provision, or read about how young women with money and affluent backgrounds were treated in the mother and baby homes in comparison to those who were destitute.

For the Stardust families, the difference between Bonnybook and Donnybrook is a matter of kilometres and a huge leap in regards to respect.

Aoife Moore: ‘We’ are not the ones who failed Stardust families (Irish Examiner)

10 thoughts on “We Are Stardust”