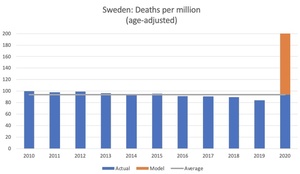 A single chart can say so much. This one tells the story of how overblown models stoked a mania, how lockdown benefits were overestimated & how much the media have misrepresented reality. Orange is what they feared if Sweden didn’t lock down, blue is what happened when it didn’t. pic.twitter.com/zyVRHRD0aO

The media in Sweden misled by downplaying the reality on the ground in Sweden, that’s true but your graph looks fictitious. https://t.co/JbscEv6HcE

It looks fictitious only to people who have swallowed the false media narrative, spouted by the likes of @guardian. Sweden never had stay-at-home orders, business closures, school closures, mask mandates. The reversal of a century of PH guidelines elsewhere was deeply foolish.

‘It Has Very Much Relied On Its Relationship With Its Citizenry’

Which Do You Choose, A Hard Or Soft Option?