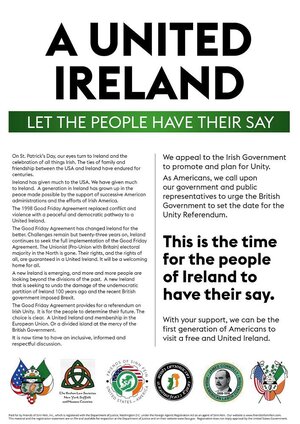 Leading Irish American organisations call for Irish Government to prepare for Irish Unity and British Government to set date for a referendum. Time for an inclusive, informed and respectful discussion. Time to let the people have their say. #Time4unity pic.twitter.com/d6dxID3sTl

Sinn Féin has taken out adverts in a number of US newspapers calling for the Irish Government to prepare and plan for a united Ireland.

The half-page adverts are appearing in the Washington Post and the New York Times, with full page colour advertisements in the Irish-American newspapers, the Irish Voice and the Irish Echo.

Land Of Milk And Honey

38 thoughts on “The American Market”